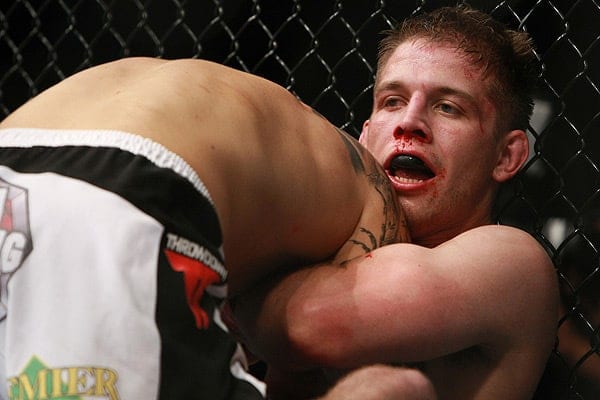 Legendary multi-class UFC champion BJ Penn made a surprising appearance on UFC Tonight last night (Wed., September 30, 2015), and the topic of conversation centered on his unfortunates 2014 exit from the UFC after a brutal beating at the hands of Frankie Edgar.

Penn placed much of the blame on nutrition guru Mike Dolce, and he isn’t letting the grudge go. ‘The Prodigy’ said he wants to take on former Dolce employee Nik Lentz in the octagon and then find Dolce out back to ‘smash’ him.

And it didn’t take long for the all-time great to get a response from ‘The Carny,’ who took to Instagram with a seething acceptance of Penn’s challenge:

??? I don’t even and have not worked with Dolce for quite some time…so fighting with me will have nothing to do with Dolce…but for the record…fuck you BJ. You talk too much now…you use to be about actions, but now like the spoiled little rich kid you are, all you do is talk. I’ll gladly fight you anytime. So get your mom and daddy to paint you some plans, fly Hawaii out to Vegas, give little baby Penn what he wants and come out of retirement …. This time I’ll make sure to retire you properly #BringPennBack

It looks like the gloves are off already, and even though this fight makes absolutely no sense in terms of the future of the UFC featherweight division, it would certainly be a fun one to settle a grudge.

Penn is arguably one of the most popular fighters to ever fight in the UFC, and even though Lentz put on a rousing ‘Fight of the Night’-winning performance against Charles Oliveira earlier this year, he’s probably not going to ever get as big a name as Penn.

Their beef in the media could just be beginning, and probably won’t anytime soon until the fight is booked. Do you want to see Penn take out his frustrations with Dolce on Lentz, or is ‘The Prodigy’ too far out of shape to beat even any semi-relevant fighters?