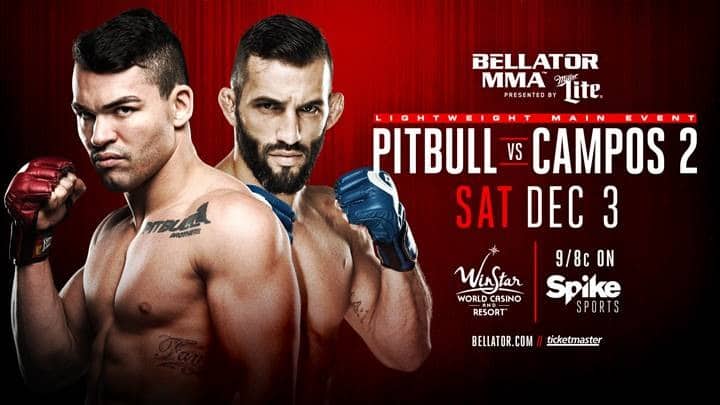 Bellator MMA has announced a new main event for their upcoming Bellator 167 event. An undisclosed injury to Pat Curran, who was originally scheduled to fight John Teixeira (20-1-2) at the event, has pulled out of the fight.

A lightweight main event pitting Patricky Pitbull (16-8) against Derek Campos (17-6) will now headline the event. Teixeira will now face Justin Lawrence (9-3) in main card action. Also announced was the professional debut of three-time All-American wrestling prospect Jarod Trice, who will fight Brandon Lee (4-1) on the prelims. A flyweight bout pitting undefeated budding superstar Ilima-Lei MacFarlane (4-0) against Emily Ducote (4-1), as well as Chidi Njokuani (15-4, 1 NC) versus Andre Fialho (7-0) in three rounds of welterweight action has been added to the main card as well.

The promotion will be returning to the WinStar World Casino in Thackerville, Oklahoma for Bellator 166 on December 2 as well as on December 3rd with Bellator 167. Tickets for both events start at just $45 and can be purchased at the WinStar World Casino & Resort Box Office, as well as Ticketmaster and Bellator.com. The prelims for Bellator 167 will air on Bellator.com while the main card will air live on Spike at 9 p.m. ET/8 p.m. CT