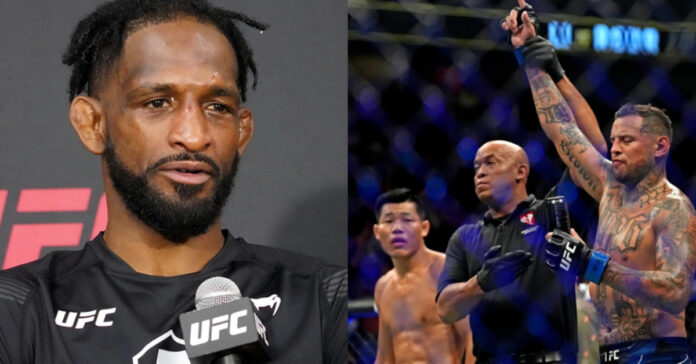 UFC veteran Neil Magny has made a career of late notice fights but even he was surprised when the UFC scheduled him to fight Daniel Rodriguez.

In a recent interview with LowKickMMA, Magny explained his confusion.

“I went to bed Wednesday night without a fight, woke up Thursday with every media outlet saying I was fighting Daniel Rodriguez.”

The process for booking this fight at UFC Grasso vs Araujo on October 15th was extremely complicated, Magny had two initial opponents pull out before there were rumors of a Kevin Holland fight. Eventually, the UFC offered him Rodriguez, a fighter who is coming off a controversial spit-decision win over Jingliang Li less than a month ago.

Magny spoke about his future opponent in detail:

“He’s a very good southpaw boxer, southpaws tend to give a lot of guys difficulties... He’s going to have a chip on his shoulder, he’s going to be thinking I have to go out there and prove to the world that I did win my last fight.”

Neil Magny on learning from the Shavkat Rakhmonov loss

Magny’s last fight was a stoppage loss to the undefeated up-and-coming prospect Shavkat Rakhmonov, who has finished every opponent he has faced.

“Everyone is always looking for a reason to rule you out, oh yeah that guy is history now. It’s up to me to go out there and show everyone that I am still that dude.”

Magny also spoke about taking on too much as a fighter and how he has changed that now:

“I had to clear my plate, I have so many things outside of fighting it can become distracting. I’m worried about two things now being the best possible father and fighter.”

In a perfect situation for Magny, should he beat Daniel Rodriguez, he wants to call out Gilburt Burns and fight him in his native country of Brazil.

Burns has still not fought since his fight of the year contender against Khamzat Chimaev where he made the undefeated prospect seem human.