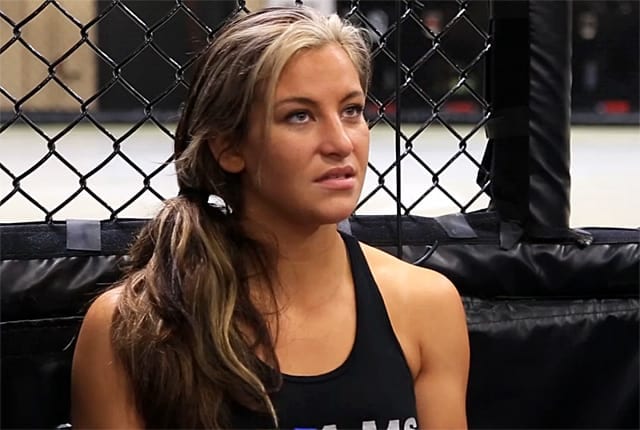 The second time the two met, Tate took Rousey to the third round, something no one else has done before, but ultimately came up short again. Since then, however, she has rattled off four-straight wins, most recently scoring a dominant win over Jessica Eye at UFC on FOX 16.

Due to “Cup Cake’s” recent win streak, Dana White had confirmed that she would receive the next shot at Rousey. However the division, and the fans were shocked when it was recently announced that it would be former boxing world champion Holly Holm challenging the “Rowdy” one at UFC 193 in November.

Speaking on yesterday’s broadcast of Invicta 14, Tate admitted that she wasn’t even informed by the UFC of the decision. “Cup Cake” had already started preparing for her third crack at Rousey, and claims that it’s been a pretty “heartbreaking” process:

“I found out later than half the world, even, because I was still asleep, I guess, when it was announced. I woke up to about 30 texts on my phone saying, ‘Oh, I’m sorry,’ and I was like, ‘What?’” Tate said. “It sucked not finding out from the promotion itself, so I felt a little bit disappointed and my feelings were kind of hurt, to be honest. I was really bummed out because I was really motivated and I really felt like I hit a new level.

There have been rumors that Tate would instead face off with fellow surging contender Amanda Nunes, who starched Sara McMann in her last bout, next, but Tate has no confirmation of any future plans:

“No, (I’m) definitely not (signed to fight Nunes),” Tate said. “I haven’t talked to the UFC or my coaches or my management about it. … As far as what’s next, I really don’t know I need to get home and talk to my management and my coaches.

Should Tate have been given the shot at Rousey as she was promised?