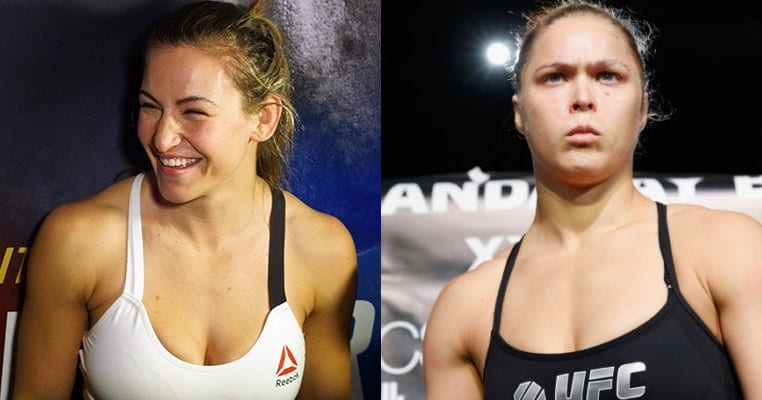 Ronda Rousey hasn’t competed since being brutally knocked out by Holly Holm at Nov. 2015’s UFC 193 from Melbourne, Australia, but she’ll return to action at this Friday’s (Dec. 30, 2016) UFC 207 from Las Vegas, Nevada to challenge champion Amanda Nunes.

Many have questioned Rousey’s mentality heading into her return bout including former champion and two-time Rousey foe Miesha Tate, who recently wondered whether or not the lack of media Rousey is doing is any indication of where her mind is:

“I think this is a huge fight and I think both of them should be doing the media, being accessible a little bit to the fans,” Tate said. “I sympathize, it’s fight week, but you have to do it, there’s never been any exceptions.“

Tate also touched on the “Rowdy” one’s rather long layoff after such a disappointing loss, saying that she doesn’t believe Rousey truly wants to fight anymore:

“If she really wanted to be fighting, I think we would have seen get back there,” Tate said. “Really competitive people, when they lose, they’re all ‘I want to get back in and do it again, do it again, do it again and prove I can get better.’ I’m not saying that’s always a wise decision but typical some people who lose, they want to fight, go back in there and get their redemption. Taking a year and some change off says that she wants to do some other things. I don’t think she wants to be in there fighting anymore.”

As far as her prediction for the fight goes, Tate seems to believe that it’ll all come down to heart:

“When push comes to shove, I don’t know if Ronda’s heart is in it any more. Amanda’s is.”

Who do you expect to walk away with 135-pound gold later this week?