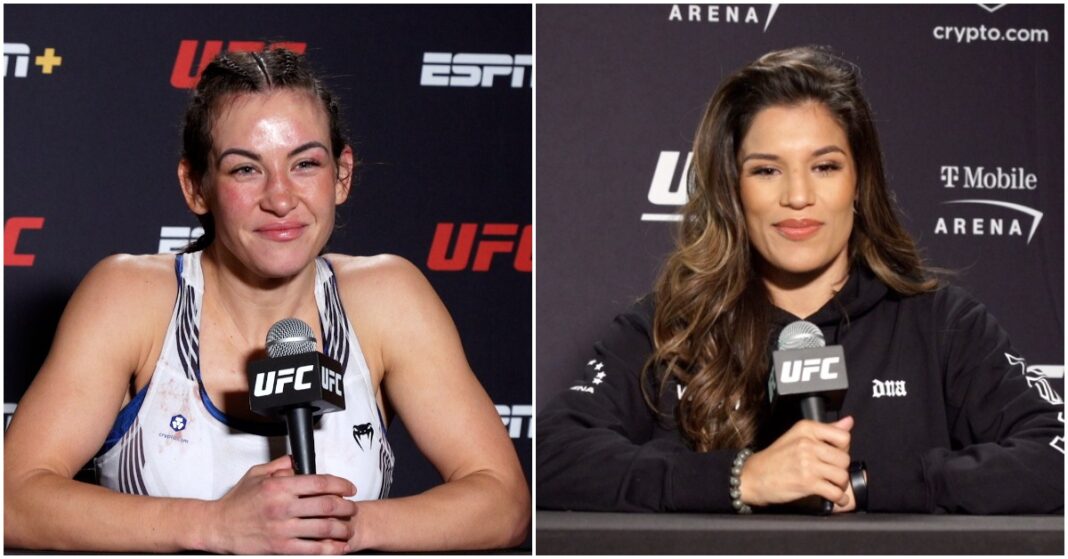 Miesha Tate has stated that she could move down to flyweight following Julianna Pena’s win over Amanda Nunes for the title.

The former UFC and Strikeforce champion, who returned to the sport after a five-year layoff in July has been looking for a road to the title since her comeback. Tate is also good friends with newly-crowned bantamweight champion, Pena – who Tate actually used her first pick on in season 18 of The Ultimate Fighter.

As Pena is now champion, she is now the hunted by everyone in the division, regardless of friendship. Although the title is on her mind, Tate is unsure if she could face Pena in the octagon.

In an interview with MMAJunkie Tate said, “I don’t want to fight Julie because I’ve rooted for so long for her to get there.

“A lot can change between now and then, so I have to win and do my job so I think what really I’ve got to do is win and focus on that. If Julie’s still the champion by the time that I get there, then I think that’s a conversation we have at that time.

“I’m going to continue to cheer on Julie and pray that we don’t ever have to fight each other,” Tate said. “I know that Julianna can make 125 and I can make 125. There’s also those things too. It’s not out of the question for either of us to go hunting Valentina (Shevchenko) at some point. There’s lots of dynamics. I know she really wants that fight too so we’d have to see what happens if everything continues to play out in that direction, there’s always that possibility of us going to 125 for either of us too.”

How Likely Would A Fight Between Miesha Tate and Juliana Pena Be?

As Pena is coming off that gigantic underdog win against the long-time champion and who many consider to be the best female fighter in Nunes there will be a rematch early next year. Nunes has proven herself as one of the best ever and the rematch is from a guarantee although Pena performed fantastically.

Tate, who is coming off a unanimous decision loss to Ketlen Vieira is currently ranked number seven at bantamweight. Tate would need to pick up at least a couple of big wins to be in the title picture but Tate is a big name and as a former champion, the opportunity could come earlier.

The same situation came about but this time after Tate had captured the title and Pena was the contender back in 2016.

“Me and Miesha have discussed fighting each other. We said the only way we would fight each other is if her or I had the belt,” Pena said at the time. “Now that she has the belt and I get my hand raised be it July 9, I will ask for a title shot. I only think that that’s right. I’m sure she will accept, be it that she wins, which I’m sure she will.”

What do you think? How would Miesha Tate do down at flyweight?