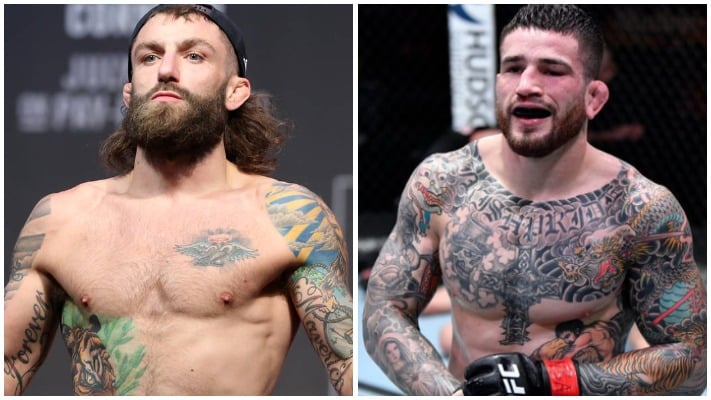 A fun welterweight match-up between Michael Chiesa and Sean Brady is set for November 20.

Brett Okamoto of ESPN took to social media on Thursday to break news of the exciting fight between two potential title challengers at 170lbs.

“Interesting welterweight fight on tap for Nov. 20, per sources,” Okamoto wrote on Twitter. “Sean Brady vs. Michael Chiesa. Chiesa (@MikeMav22) is ranked No. 7 in the UFC rankings, Brady ( @seanbradymma) is No. 13.”

Chiesa suffered the first defeat since moving up to welterweight when he squared off against Vicente Luque at UFC 265 on August 7. The Ultimate Fighter winner started well in the fight and appeared to be on the verge of a first-round submission victory. Unfortunately for him, the tables quickly turned, and it was he who was forced to tap out.

Prior to that defeat, Chiesa had picked up four straight wins since moving up to welterweight. The 33-year-old beat Carlos Condit, Diego Sanchez, Rafael dos Anjos and Neil Magny to establish himself as a legit contender at 170lbs.

Brady has also put together an impressive four-fight run in the UFC’s welterweight division since signing with MMA’s premier promotion back in 2019. The 28-year-old boasts a perfect 14-0 record that he was set to put on the line against Kevin Lee earlier this year before the fight fell apart on two different occasions.

Brady and Lee were originally supposed to meet at the T-Mobile Arena in Las Vegas, Nevada at UFC 264 on July 10. Unfortunately, ‘The Motown Phenom’ suffered a rib injury and was forced to withdraw from the bout. The fight was rescheduled for August 28 but was once again called off after Brady was hospitalized due to a foot infection. Lee fought late replacement opponent, Daniel Rodriguez, and was soundly beaten over three rounds.

Who do you think will win on November 20? Michael Chiesa or Sean Brady?