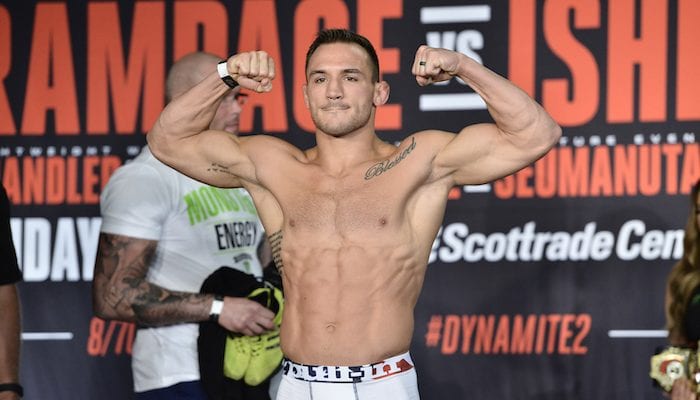 Former lightweight champion Michael Chandler says he’s loved fighting for Bellator but it won’t be a factor when he testing free agency.

Chandler has spent most of his professional career with Bellator but now has just one fight left on his contract. The 34-year-old has previously gone on record to say he’ll test free agency and is open to signing for either UFC or ONE Championship.

Speaking to MMA Fighting Chandler explained he’d happily finish his career with Bellator but insists money will dictate where he ends up fighting next, he said.

“I’ve been on record saying I’d be very happy if I’m a Bellator fighter for the rest of my career and I retire with Bellator and I continue to pour into the company that has poured into me. We’ve had a very good, symbiotic, mutually beneficial relationship. But also at the same token, I’m a prize fighter who fights for his family, his wife and his son, and our future and our platform and what we can do together. I’ve got to make the best decision for me and my family. As of right now, Bellator has not come with an offer we have accepted. We’re kind of in that limbo where I’m going to train and do my job just like any other athlete who is coming up to the end of their contract.”

The UFC lightweight division is arguably the most stacked in all of MMA. This is something that hasn’t gone unnoticed by Chandler who seems game to thrown down with the best 155’ers in the world, he said.

“For me obviously, I’ve enjoyed my time with Bellator and all the big fights that I’ve had ,but of course, there’s not a day that goes by that I don’t get compared to these other people or fans don’t reach out on social and say ‘I’d love to see you fight this guy or that guy’.”

“Right now, Khabib [Nurmagomedov] is the No. 1 guy in the world, and rightly so – he’s undefeated. Then you’ve got Tony Ferguson right there nipping at his heels, and he’s on a 12-fight win streak, then you’ve got Justin Gaethje stepping in. The landscape of the entire world is a deep one at lightweight.”