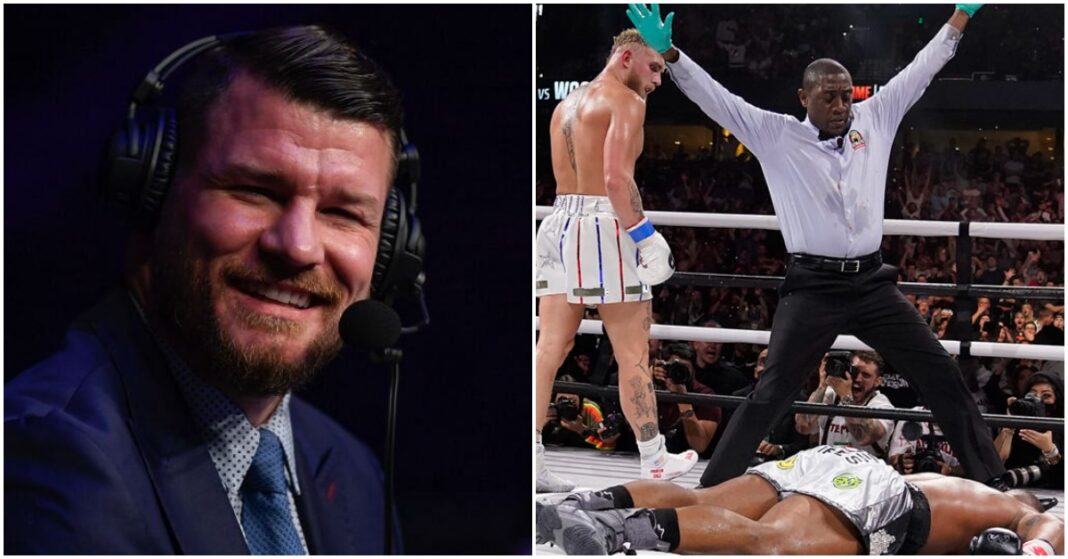 Michael Bisping has put praise onto Jake Paul following his devastating KO of Tyron Woodley this past weekend whilst speaking on an episode of his Believe You Me podcast.

Paul and Woodley faced each other once again come Saturday night and although many fans again were disappointed with the performances of both, that all soon changed when Paul landed an overhand-right which sent Woodley faceplanting to the canvas in the 6th round.

The former UFC Champion praised Paul for the power he was able to generate within that shot and highlighted how it wasn’t something he was able to do during his long and successful career.

“I’ll tell you this. Here’s another thing, he’s knocked out everybody that he’s faced. He knocked out Tyron Woodley, Ben Askren, Nate Robinson. And I’ll tell you what, that knockout of Woodley there – I’ve had about 40 professional MMA fights, boxing fights, kickboxing fights – I’ve never slept anyone like that. You know what I mean? That was a f***ing knockout and a half.”

However, like many fans, Michael Bisping was disappointed with the overall performance of both men inside the ring. Until the knockout blow came there had been very little of anything from either fighter.

“I did watch it, the debacle that it was. It wasn’t really a fight, it’s always tricky talking about Tyron Woodley because I like Tyron a lot, but what a s*** show! What a s*** show that was, f*** me, even their own commentators were talking s*** about it and saying, ‘what is this?’ I forget what the exact quotes were but they weren’t very complimentary. There was a lot of hugging, there wasn’t too much fighting and fortunately for Jake Paul, he managed to get the knockout in the sixth round.” (Transcribed by sportskeeda.com)

Following on from this victory, who is next for Jake Paul?