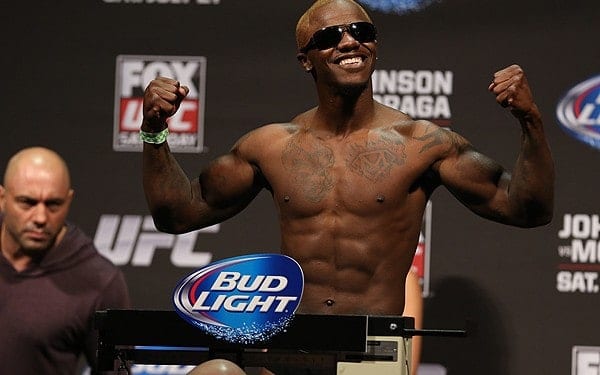 Melvin Guillard (32-14-2 MMA, 0-0 BMMA) was cut from the UFC a few years ago and then went on to sign with World Series Of Fighting in 2014, which he posted a 1-1 MMA record. Guillard recently signed with Bellator MMA, he’s made the rounds to say the least.

Guillard is a journeyman, he’s been everywhere. Longtime veteran for sure. He’s been in the three top MMA promotions in the United States, which have three different levels of payment. UFC is where fighters make the most then Bellator offers good money and then WSOF is where the true prospects are built from with not a ton of money.

With the Reebok fighter sponsorship being a big topic, within the MMA community, talks of would a fighter turn down the UFC to go to either Bellator MMA or WSOF due to making more in sponsorship revenue, has been brought up.

According to Guillard, there’s more sponsors offering him money when he first signed with Bellator MMA compared to his time in the UFC or WSOF.

“The sponsorships are sh-tting on UFC and WSOF, as of right now. It’s (Bellator) blowing them out of the water right now, Guillard told MMA Junkie.com. It’s definitely blowing them out of the water. My agent is still working on that right now. I’m two weeks out from my fight and I still have deals on the table right now that haven’t been officially signed yet. As far as people actually wanting to be behind me, and that’s coming off a loss and not making weight, there’s lots. People still are in my corner.”

Guillard explained how money does play a fact in the decisions he makes in his fighting career.

“I just turned 32 this year and I’m just hitting my prime, but I am getting older; for me right now it’s about making money,” Guillard said. “Bellator is giving me the opportunity to make a lot of money. I’ll take a quote from (Floyd) Mayweather when he said, ‘I’m a prize fighter and I fight for money.’ You can quote me on that. I’m a prizefighter – I fight to make a living. I’ve been doing this for 22 years and I’ve made some decent money, but I haven’t made any great money. Right now I have the opportunity to make a lot of great money, not just through Bellator, but through things like endorsements that were taken away from us in the UFC. Things I couldn’t get while I was in World Series because most people don’t know what that organization is. For me, being with Bellator, Bellator is a household name just as big, if not bigger than UFC. They’re right up there and getting a lot of attention not only from fans but also from the fighters who don’t want to be in the UFC anymore. They come to Bellator because the money is right.”

He will make his Bellator debut in a lightweight bout against Brandon “Cold Roll” Girtz (11-4) on Friday, Aug. 28 at Pechanga Resort & Casino in Temecula, Calif.