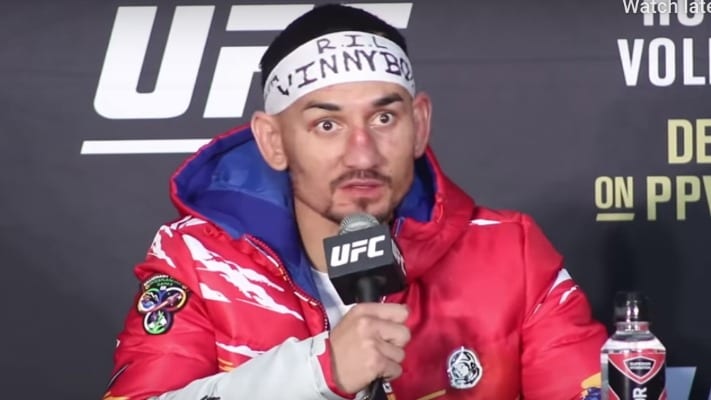 Max Holloway is no longer the UFC featherweight champion. And he didn’t expect that to be the case either.

Holloway fought Alexander Volkanovski in the co-headliner of UFC 245 on Saturday night. It wasn’t an action-packed fight but more of a technical contest with Volkanovski using his jab, range and effective leg kicks throughout the 25 minutes.

In the end, all three judges scored it for “The Great” crowning him as the new featherweight champion. Holloway took the loss in stride but speaking afterwards in the post-fight press conference, revealed he felt he had done enough to come away with the decision:

“I don’t want to sound like no sore loser,” Holloway said (via MMA Junkie). “I haven’t watched the tape or nothing, but I thought I had enough. But there’s two guys that opinions who matters the most and them two didn’t treat it my way. But it is what it is. We’ll be back. Like I said, I’m only 28. I’m only 28 guys and we’ll be back when I’m ready.

“… I thought the first round I was feeling him out, so he did what he did in the first round. Second round, I thought I was taking over, then three, four, five I thought was mine. But they saw it other ways. There’s only three opinions who matter. Like Burt Watson said, ‘Don’t leave it to the judges, they’ll make you cry.’ They made me cry twice in 2019, so let’s look forward to 2020. New year, new me.”

Luckily for Holloway, it looks like he’ll get a chance at redemption. UFC president Dana White believes an immediate rematch is in order while Volkanovski has also welcomed the prospect as well.

Did you score the fight for Holloway?