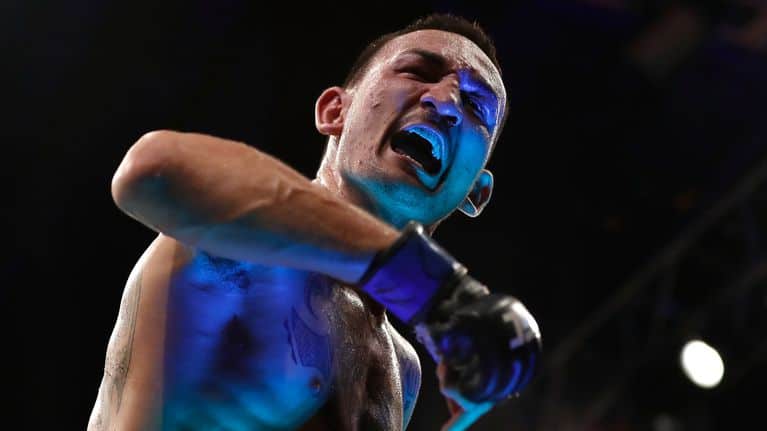 Max Holloway sounds off on his battles with depression following the drama that surrounded his previously scheduled fight.

It’s been well documented that he was supposed to make his next title defense against Brian Ortega in the co-main event of the UFC 226 pay-per-view event. This fight didn’t happen as Holloway was forced to pull out of the fight after he had been experiencing concussion-like symptoms. He was taken to a hospital earlier that week then appeared to be better. Then it took a turn for the worst and the fight was nixed.

Holloway discussed this during an appearance on Good Show with Ben Ennis & JD Bunkis as well as where he would talk about his battle with depression.

“It just helped me as a person realize that sometimes you gotta slow things down to get things back correct,” Holloway said of his recent struggles (H/T to MMA Fighting). “After this last one I dealt with some depression. I was talking about [NBS star Demar] DeRozan.”

Holloway brought up how once DeRozan talked about depression then it shook him up pretty good.

“DeRozan talked about depression and that really shook me. He said that he wished that everybody was rich, that everybody in the world had money so they could understand that money does not make you happy.”

The featherweight champ admitted that depression hit him hard and that if he wasn’t talking to anyone, it would hit him even harder.

“Depression is real and that really hit me hard. I was going through a phase where I wasn’t talking to no one. Only my son. Me and my son would do stuff but I was talking to no one. If I wanted to you I would call you but if people were reaching out to me I was putting myself away.”

Max stated that he is glad that to be able to go out and talk about his battles with this issue.

“Since I was in that situation, now I’m able to talk about it and I can tell people that’s not the way to do it. The way to do it is talk to your family, talk to your friends, be with everyone because you don’t know when things can change. Life changes on a dime so live life to the fullest.”

Holloway is slated to defend his title against Ortega at the UFC 231 pay-per-view that is set to take place on Saturday, December 8, 2018, at Scotiabank Arena in Toronto, Ontario, Canada.

“Don’t be scared to look for help,” Holloway said. “Depression is real. . . It’s crazy and all these guys, us athletes, that keep thinking we’re superheroes. I like to think I’m a superhero but superheroes got to fight their demons too sometimes.”