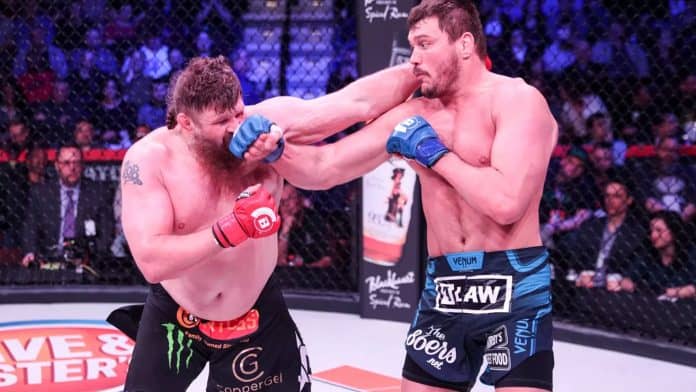 Prior to Bellator 194, which took place last Friday (Feb. 16, 2018) from the Mohegan Sun Arena in Connecticut, Matt Mitrione and Roy Nelson had always been cordial towards each other.

The two competed together on season 10 of The Ultimate Fighter (TUF) and then fought in 2012 when Nelson scored a knockout victory over Mitrione. After their Bellator Heavyweight Grand Prix bout last week, however, which Mitrione won via a somewhat controversial decision, the feelings are no longer the same, especially from Mitrione’s end.

On today’s (Feb. 19, 2018) edition of The MMA Hour, Mitrione called out Nelson for using the fence and ‘cheating’ in the third round, which was a round that “Big Country” clearly won:

“Roy then took his right big toe and lifted his foot off the ground and stuck it inside the fence,” Mitrione said. “And then for 45 seconds — or 40 seconds or so — inside of that round when he was on top of me punching me or elbowing me, he was cheating. He had all this leverage, because he was pushing off the fence driving into me.”

Continuing on, Mitrione said that Nelson’s actions were ‘garbage’, once again voicing his displeasure with how the round played out:

“For Roy to grandstand, to be like, ‘Oh, I’m full of integrity, I don’t cheat, I don’t steroids or anything else, blah blah blah,’ and then when the fight comes down to it, to say you need to win, because you lost the first two rounds, then you start to cheat just so you can win?” Mitrione said. “That’s garbage, man. You’re a grandstanding dude with false integrity and I’ve got nothing for it. And if you guys think I’m being a sore winner, just go back and watch the film.”

The former NFL player then went as far as to call Nelson a ‘dirtbag’, while also saying that he’s got ‘character and quality’ issues:

“Old boy has got issues,” Mitrione said. “He’s got character and quality issues. I don’t like Roy Nelson. He’s not my dude anymore. I have no plans to be cool with him. If you’re gonna cheat to try and beat me, you’re a dirtbag and I’ve got no respect for you. So I’ve lost all juice for Roy. All of it.”

Those are certainly some bold claims from Mitrione, but what do you make of his comments?