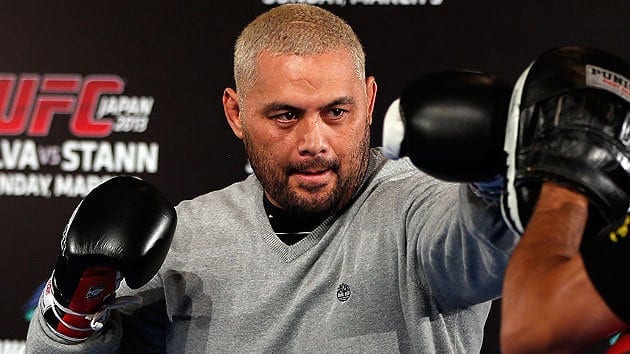 Longtime fan favorite Mark Hunt has completed tests that will largely determine the future of his decorated fight career.

“The Super Samoan” was removed from his scheduled headliner against Marcin Tybura at last weekend’s UFC Fight Night 121 from Sydney, Australia, after telling Players Voice that he was experiencing concerning symptoms like memory loss, trouble sleeping, and slurring of his words, a showdown that lead to a harsh response from Hunt to the UFC.

UFC President Dana White insisted they were simply trying to help Hunt avoid potentially serious issues such as CTE, and that he could come to Las Vegas to have some tests conducted to make sure he could continue to fight following a long career of absorbing insane amounts of punishment as one of the most notoriously iron-chinned fighters MMA has ever seen.

Apparently Hunt took his employers up on that offer, as ESPN’s Brett Okamoto tweeted that “The Super Samoan” was in Las Vegas meeting with a specialist at the Cleveland Clinic:

Mark Hunt is in Las Vegas today. He's meeting a specialist at Cleveland Clinic Lou Ruvo brain center. Should have an update on his health and UFC future soon.

After speaking to his management, MMA Fighting’s Ariel Helwani expanded on Okamoto’s earlier report by revealing Hunt had completed the examination and a report would be coming next week, with Hunt and his team remaining confident he would be cleared. The New Zealand knockout artist reportedly then went to the UFC Performance Institute:

Per his mgmt, Mark Hunt was flown to Vegas yesterday to undergo further testing (he spoke about this offer on the show a few weeks back.) Tests done today. Results next week. They seem confident they will be cleared. Hunt is at the UFC PI (see below). H/t @bokamotoESPN https://t.co/7ORSDiBhwl

The MMA universe will await the results of the tests with baited breath, as Hunt is deservedly one of the most beloved fighters in the game thanks to his otherworldly knockout power.

He was also revered for a chin that matched, although it has begun to show the inevitable signs of wear that any top fighter would show after years of taking punches from the best heavyweights in the sport. No matter what the tests reveal, Hunt will go down as one of the toughest old-school fighters, and if he is indeed allowed to fight on, we can only wish his health remains steadfast as he fights on well into his 40s.