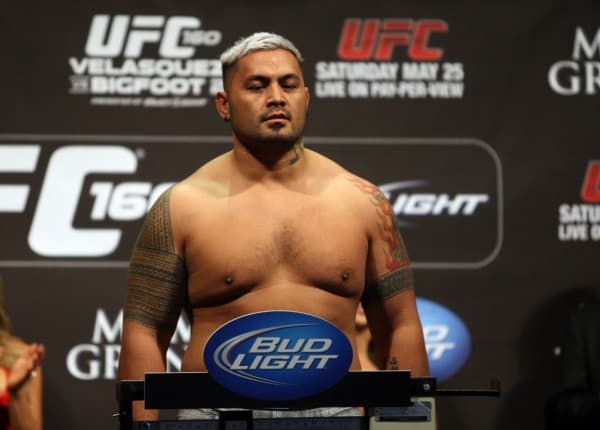 For the second time in as many months, UFC heavyweight Mark Hunt has to cut some serious weight…..

The news that Mark Hunt will fight Fabricio Werdum for the interim title at UFC 180 emerged yesterday, and fans of “The Super Samoan” were delighted. The Pride and K-1 veteran has been campaigning for a title fight since he went 4-0 for the promotion between 2011-13. Hunt’s latest appearance was a crushing knckout against Roy Nelson back in September, a fight which included a sizeable weight cut for “The Super Samoan”.

Given that he only has four weeks to prepare for the November 15th showdown with “Vai Cavalo”, it looks like Hunt has another hefty weight cut to endure. Speaking with MMAFighting.com, Hunt confirmed that he weighs 302 pounds right now, meaning a 37-pound weight cut is in order to make the heavyweight limit of 265 pounds.

“Don’t think I [hestitated],” he said. “Only challenge is making weight.”

When it was revealed that he would have to cut a similar amount before the weigh-ins against “Big Country”, the New Zealand native shrugged off the drama. A man of Hunt’s size has plenty of water weight to cut, so I shoudn’t worry about him actually being on point for fight week.

The question is, how will such a short and intense camp, coupled with a 37-pound weight cut impact “The Super Samoan” come fight night? Let’s hope both men will be in shape, as they meet for the interim belt at UFC 180!