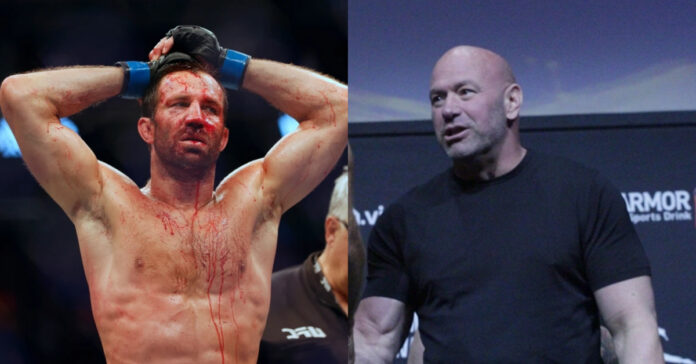 Luke Rockhold has opened up about his rant during the build-up to his retirement fight at UFC 278.

Former UFC middleweight champion Rockhold returned to action after a three-year hiatus to take on former title challenger Paulo Costa last Saturday. Costa broke Rockhold’s nose in the first round, forcing him to breathe out of his mouth and gas out early. However, Rockhold’s indomitable will kept the bout competitive until the very end, leading Costa to come out on top of the judges’ scorecards.

After the hard-fought loss, Rockhold announced his decision to retire from the sport.

Luke Rockhold opens up about mistreatment by Dana White

In an appearance on The MMA Hour with Ariel Helwani, the former Strikeforce champion revealed his reasons behind bashing the UFC and company president Dana White.

“You gotta go out on your shield, right?” Rockhold said. “I’m here to fight. People lose track of who I was and what I’ve done. Everyone was like, ‘if you don’t need this and you want this, what’s going to get you up in those moments?’ It’s f**ked up to say.

“Why do you think I’m so mad at Dana? It’s because Dana never gave me a chance. From the moment I came into the UFC, he never gave me a f**king chance. Wrote me off, never highlighted my years in Strikeforce or anything I did on the wins, only my losses. Dana White controls the narrative of what the public perceives. He f**ked me from the start and it took me 16, 17 years to come back and give a fight like that, to earn my respect. Nothing I did in the past mattered until now. That’s why I feel the way I feel sometimes.

Following Luke Rockhold’s final bout, White praised the 37-year-old Californian’s achievements and stated that there was nothing but respect for him. Rockhold expressed his gratitude for the kind sentiment and especially liked it being in public.