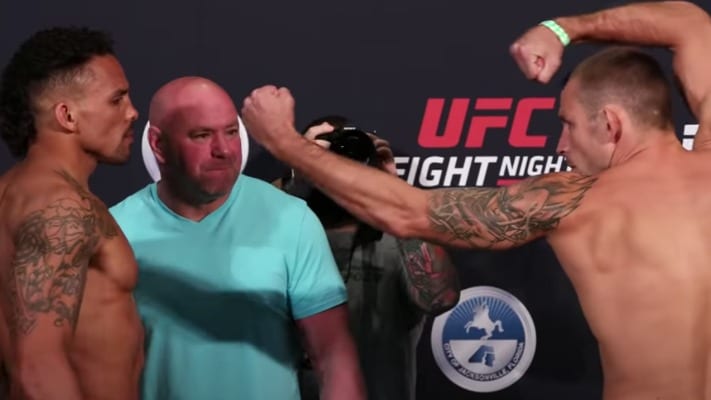 Next up on the UFC Florida main card is a light heavyweight affair between Eryk Anders and Krzysztof Jotko.

Round 1: Jotko starts off with a front kick to the body. He sees his head kick blocked soon after. Anders rushes forward but doesn’t land anything significant while Jotko lands a counter right. Jotko attempts a spinning elbow but Anders counters by clinching him up against the fence. Jotko escapes. Jotko lands a big uppercut. Anders goes for the takedown but Jotko gets up soon after. Jotko lands some leg kicks and then goes for a takedown. He has Anders’ back and takes him down only to end up at the bottom. He scrambles and they’re on their feet. They start to brawl before Jotko has Anders clinched up against the fence as the round ends.

Round 2: The pair return to striking to start off the second round. Anders is rushing forward and landing strikes but Jotko remains composed. Jotko lands a big left. Anders attempts a takedown but Jotko does well to fight it and eventually escape. Anders attempts another takedown to no avail. He tries again but fails as they remain clinched up until the round ends.

Round 3: Anders attempts another takedown but fails again as Jotko continues to show incredible takedown defense. Jotko is doing well with striking and moving as Anders struggles to land a meaningful shot. Jotko lands a leg kick before connecting with a left. Anders has him clinched up against the fence. Jotko escapes but Anders tries again as he looks for another takedown. Jotko reverses before Anders does the same. Jotko ends the fight with a failed spinning back kick.