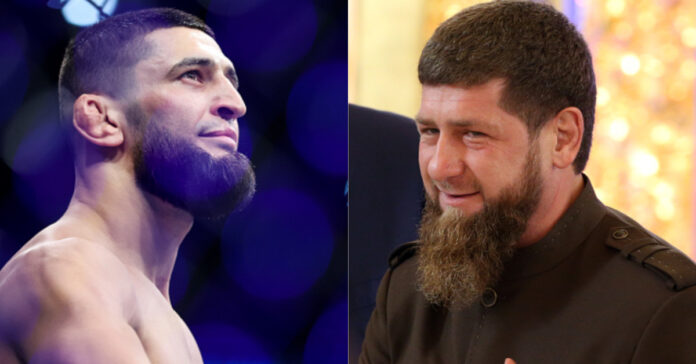 The UFC’s newest welterweight star Khamzat Chimaev does not believe that athletes should be judged based on their political beliefs and affiliations.

The promotion’s fast-rising contender recently took to Instagram to voice his disdain for mixing sports with politics. Residing in Sweden, Khamzat Chimaev was born in the occupied republic of Chechnya within the Russian Federation. Of course, Russia has received heavy criticism for its invasion of Ukraine.

“We are athletes, each of us is a patriot of our Motherland,” Chimaev said in an Instagram post. “Lately everyone has interfered with sports with politics. We stand for the country where we live. I am proud of my Motherland and I know that my Motherland is proud of me and supports me.”

While mixed martial arts fans have been enamored with Chimaev’s dominant run inside the Octagon, he has recently come under fire for his ties to Chechen dictator Ramzan Kadyrov. Taking over as the president of Chechnya in 2007, Kadyrov has been accused of multiple human rights violations that have resulted in sanctions being placed to prevent the dictator and his immediate family from entering the United States.

“The Department has extensive credible information that Kadyrov is responsible for numerous gross violations of human rights dating back more than a decade, including torture and extrajudicial killings,” said Secretary of State Mike Pompeo in an article from The Washington Post.

During the COVID-19 pandemic, Khamzat Chimaev endured a long and difficult bout with the aftereffects that had him contemplating retirement just three fights into his UFC career. It is said that Ramzan Kadyrov was the voice that convinced Chimaev to continue his MMA career.

Since then, Kadyrov has gifted Chimaev with a brand new Mercedes Benz and regularly appears with the fighter at Akhmat MMA facilities. The gym is sponsored by Kadyrov himself through his government’s budget and carries the name of Kadyrov’s father, Akhmad Kadyrov. Akhmat MMA is operated by AbuZayed Vismuradov, one of the most powerful men in Chechnya who is also sanctioned by the U.S. Treasury for “extrajudicial killings, torture, or other gross violations of internationally recognized human rights.”

Despite all of the disturbing details, Khamzat Chimaev continues to associate with Kadyrov. It’s pretty clear why Chimaev does not want athletes to be held accountable for their beliefs and affiliations.

Chimaev will return to the Octagon on September 10th in the UFC 279 main event. On that night, ‘Borz’ will face The Ultimate Fighter alumni and fan favorite, Nate Diaz in what is likely his last appearance for the UFC.