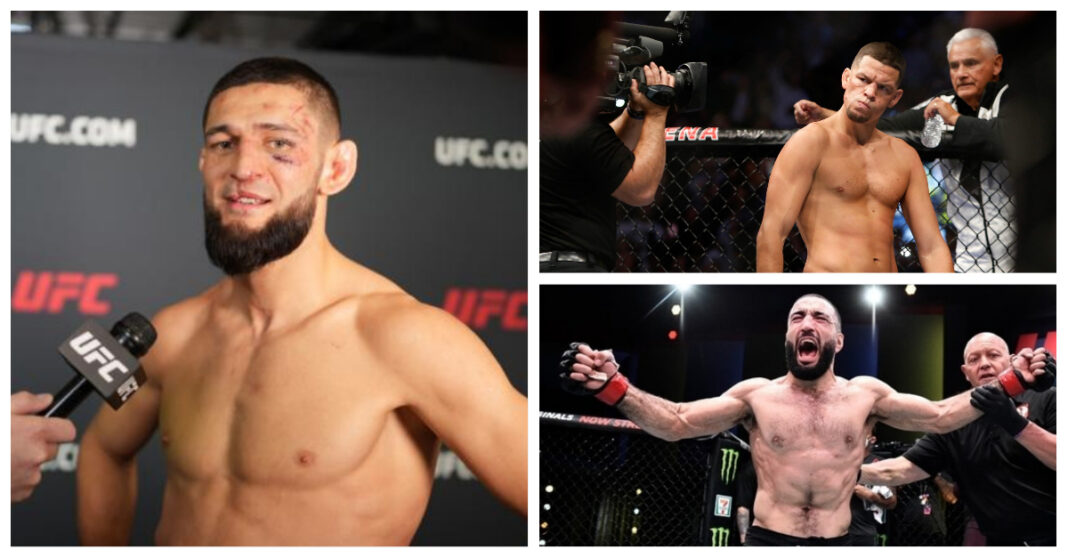 Khamzat Chimaev has scoped in on Nate Diaz as his next opponent.

The rising contender at welterweight has called for a matchup against Nate Diaz in August. Diaz has been on ice for exactly a year now since his last outing against Leon Edwards in June 2021. Chimaev has traded verbal jabs with the Stockton native who’s also reported to be on the last fight of his contract.

Khamzat Chimaev calls for a fight against Nate Diaz in August

‘Borz’ declared on Twitter that he’s ready and wants to take on Diaz in August.

“I want to fight in august, i’m ready @NateDiaz209 let’s do it skinny boy @danawhite? @ufc“

Many have speculated UFC’s decision to not offer Diaz a bout considering he’s one of the biggest stars in the promotion. Prior talks regarding a potential match with Dustin Poirier were looking good but were shut down almost instantly after interest from the UFC died down.

READ MORE:  Dana White Understands Why The Derrick Lewis Fight Was Called, But Still Believes It Was An Early Stoppage

Diaz had spoken in the past about Chimaev not being willing to fight him and expressed his frustrations at not getting the bout. Chimaev’s latest callout might add a new tale to their story.

Being the second-ranked contender in the division, a fight with fellow top-five ranked opponent Belal Muhammad could benefit Khamzat Chimaev more than an outing with Diaz when it comes to getting in the mix of title contention. There seems to be a healthy amount of mutual respect between the two as they verbally agreed to fight each other.

In a follow-up tweet, Chimaev laid out the timeline he sees fit for both matchups.

Muhammad and Chimaev had talked about a fight in October in the past, and that too in Abu Dhabi considering the demographics behind the two. It’s unclear if Chimaev is willing to wait till October if he doesn’t get a shot at Diaz or if he’ll take on another opponent.

Who do you want to see Khamzat Chimaev fight next?