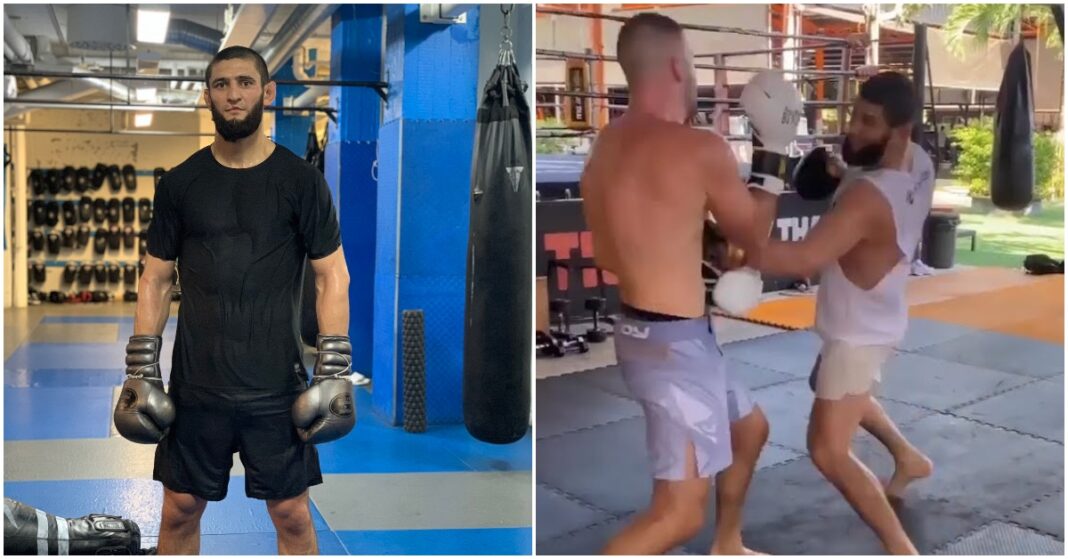 Khamzat Chimaev continues to show the MMA world the threat he poses within the 170-pound division, even away from his performances in the octagon.

The Dagestani native returned to action last October and continued to ragdoll his opponents, whilst chomping his mouth at the rest of the welterweight roster. After earning himself a spotless 4-0 UFC record, his stock continues to grow.

Despite “Borz” going in between training and fighting, Chimaev has chosen to join fellow UFC stars at Thailand’s Tiger Muay Thai gym to improve on what was already a well-developed MMA game.

We have all seen Khamzat Chimaev’s ability to dictate fights in his own dominant manner, we have even seemed his knockout power in his third UFC bout against Geral Meerschaert.

However, what can Thailand’s Tiger Muay Tai teach one of UFC’s hottest prospects?

Looking at the way Khamzat Chimaev has dropped his recent sparring partner, it looks like they are already started.

Instead of his familiar environment of Allstar Training Centre in Stockholm Sweden, Chimaev is eager to develop and expand his MMA skill set, as he prepares for his return to the octagon in Thailand.

As Yan and Fiziev prepare for their return to the octagon, Chimaev has been putting in the work ahead of his rumoured bout against No. 2 ranked welterweight Gilbert ‘Durinho’ Burns.

The No. 11 ranked welterweight’s decision to attend Tiger Muay Tai, has not only provided him a chance to broaden the weapons he can use inside an octagon, additionally it has allowed him to train with world-renowned MMA athletes; which ultimately will develop a championship mindset.

Is Khamzat Chimaev all hype or can he beat Gilbert Burns?