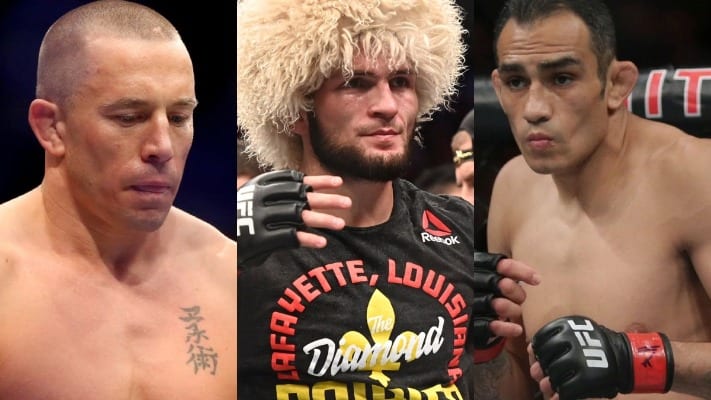 UFC lightweight champion Khabib Nurmagomedov will likely be fighting Tony Ferguson for his next title defense.

However, per Nurmagomedov’s manager, Rizvan Magomedov, “The Eagle” and his camp already have their desired opponents mapped out. Speaking to Fight World Turkey, Magomedov confirmed Nurmagomedov wants Ferguson next, before facing welterweight legend Georges St-Pierre.

“Our opponent is definitely Tony Ferguson. There’s no other name that deserves it. We wanted the GSP fight, but GSP didn’t get along with the UFC. For this reason, our only and most valuable option is Ferguson.

“However, it would still be wrong to say 100 percent in this fight without signing. If the UFC and GSP can negotiate, we want to meet GSP after the Ferguson fight,” Magomedov said.

Of course, there has been much talk about a rematch with Conor McGregor down the line. Nurmagomedov has made it clear he wants McGregor to win a few more fights and earn his way back to the title, as the Russian submitted the Irishman back in October of last year.

That remains the same, as Magomedov maintains Nurmagomedov has zero interest in the fight right now.

“The Conor rematch is not interesting at the moment. Khabib and his team have already listed the conditions of the McGregor fight. He must fight other names and win. He must show again that he is a worthy opponent and deserve the belt competition.

“If he can do it, Khabib will give him the rematch he wants. Only with trash talk, there’s a 0 percent chance of winning this fight. Clear and clear,” Magomedov said.

Do you think Nurmagomedov should fight Ferguson and St-Pierre next?