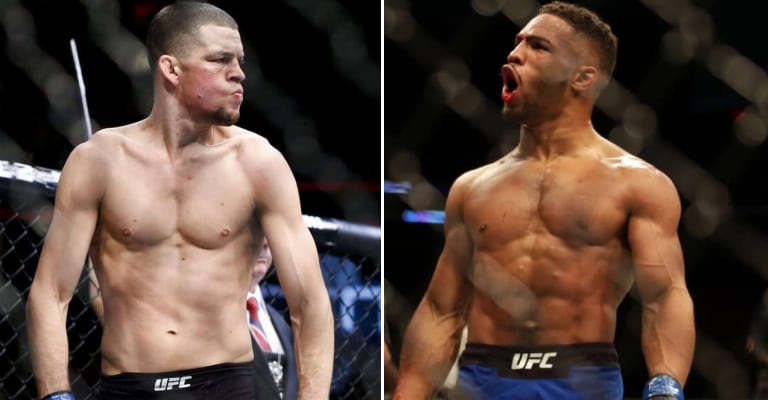 Surging UFC lightweight contender Kevin Lee may be coming off of the biggest victory of his UFC career, but he’s already set his sights on his next opponent.

After brutalizing Edson Barboza en route to a fifth-round TKO stoppage in April, Lee says he wants to welcome Nate Diaz back into the cage as rumors of Diaz’s imminent return have arisen.

With Diaz rumored to be in talks for a comeback fight at UFC 227, Lee says he’s focused on fighting the only man to beat Conor McGregor in the UFC (via MMA Junkie):

“I’m turning my focus to Nate. I think that Nate fight is out there to be had. He’s already run away from me once. Now they’ve got Aug. 4 coming up that he’s looking to get on.”

“I’m going to do a little bit of traveling, see the world a bit myself and kind of expand some more of that life to experience, which is just going to make me a better fighter. Coming back? I don’t know. I think the Khabib fight is the right one to make, but the Nate one is out there to be had. I know Dustin and Alvarez, they’re getting in it again, as they rightfully should. But we’ll how this thing shakes out. I’m going to turn my focus onto Nate.”

Diaz hasn’t fought since losing a decision in his UFC 202 rematch against McGregor back in 2016. Prior to that loss, Diaz submitted “The Notorious” in the second round at UFC 196.

Diaz has been on hiatus from fighting ever since the loss to McGregor, but sources say he’s in talks with the UFC for a return at UFC 227 in August. With every other top ten lightweight booked at the moment, that leaves No. 5-ranked Lee as the best option for the Stockton native.

How do you feel about a Lee vs. Diaz fight? Who would win should Lee get the fight he’s angling for?