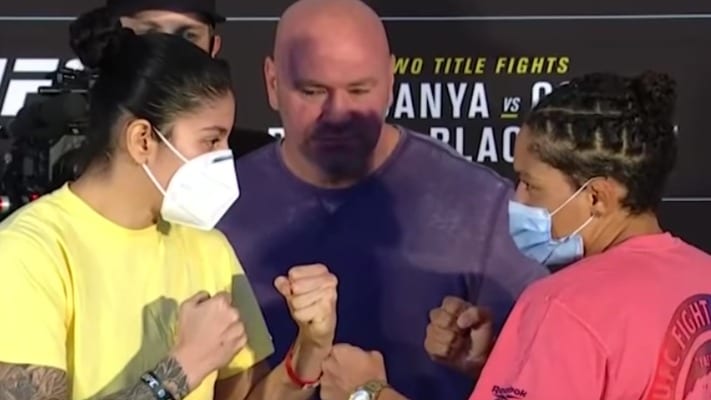 Next up on the UFC 253 main card is a women’s bantamweight clash between Ketlen Vieira and Sijara Eubanks.

Round 1: Vieira wastes no time in clinching Eubanks up against the fence. Eubanks escapes and they go to striking. Eubanks lands some good punches. Vieira goes for the clinch but Eubanks does well to defend and separate. Vieira is employing a consistent jab before both fighters start to swing. Vieira lands a nice body shot. She follows it up with a right hook that lands. Vieira shoots but it was telegraphed. However, she follows it up with strikes and lands a takedown to end the round.

Round 2: Eubanks lands a body kick. Vieira, however, returns with strikes and times a takedown successfully. Vieira is in Eubanks’ guard but hasn’t really advanced her position or landed strikes. Referee Jason Herzog eventually stands them up just when Vieira looked like she was starting to work. They start to strike and Vieira seems to be getting the better of Eubanks. The round comes to an end and it looks like Eubank is down 2-0.

Round 3: Both fighters are swinging early on in the third. Eubanks lands a stinging jab and is pressuring forward. Eubanks is landing a lot more and even lands a big head kick. Vieira lands a stiff jab. Eubanks connects with a leg kick. Both fighters continue to swing but neither are seriously hurt. Vieira fails with a takedown attempt. Eubanks counters a clinch attempt and has Vieira’s back. Vieira counters with an attempted leg lock but Eubanks escapes and ends the fight with some ground strikes.