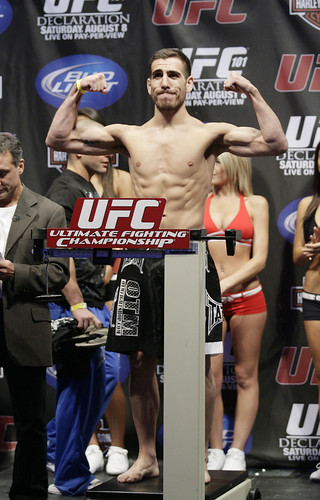 The last time we saw Kenny Florian inside the Octagon he was battling Jose Aldo for Aldo’s UFC Featherweight title.  It was Florian’s third shot at a UFC title and like his two previous attempts; Florian came out on the losing end, dropping a unanimous decision to Aldo.  Following the fight, a forlorn Florian would not speculate on his future as a fighter.

Florian’s decision on his future may be taken out of his hands as he recently revealed that a herniated disc in his back may force him to hang up the gloves, “I’ve kind of been going back-and-forth with some of the doctors, so it’s possible. I’m going to see. As of right now, obviously I can’t compete and train like I was at all. I’m just kind of doing what I can and hoping that things heal up and get better. I’m just kind of in a holding pattern. That’s why I decided to do this commentary for the time being and take this next six months to really heal up and try to make some money on the side. It sucks. The last couple of months I’ve just been figuring out what’s going on and what I’m going to do.” – for more see BostonHerald.com

What do you think LowKick’ers; what will Florian’s legacy be if he is forced to retire?

Photo: Kenny Florian during the UFC 101 weigh-ins at the Wachovia Center on August 7, 2009 in Philadelphia, Pennsylvania. Francis Specker