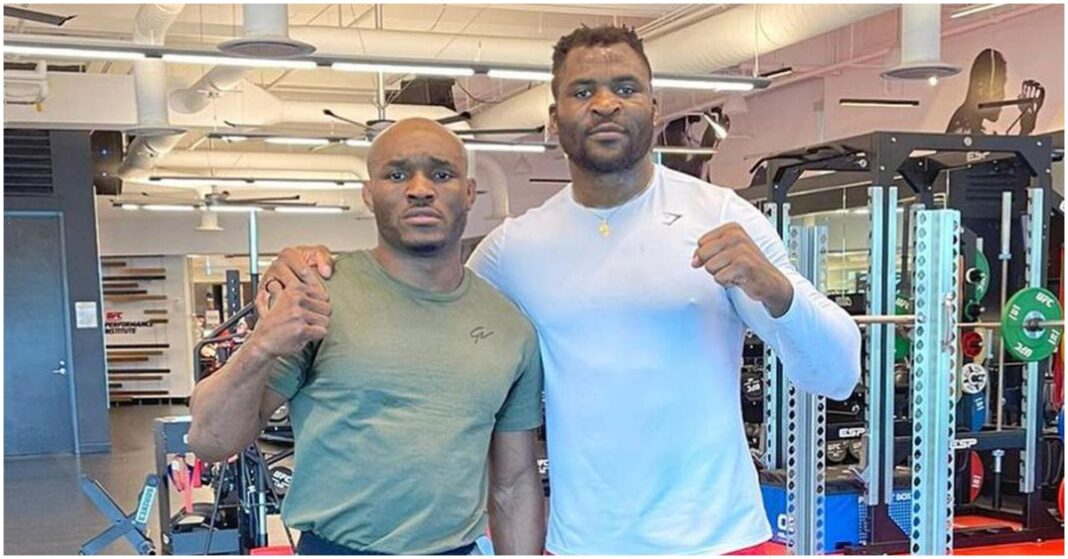 Kamaru Usman will again be in the corner of, Francis Ngannou when he defends his Heavyweight belt in the main event at UFC 270.

The reigning Welterweight champion is a good friend of his fellow African native Champion and was there In ‘The Predator(’s)‘ corner when he exacted his revenge against Stipe Miocic, to become the Heavyweight King nine months ago.

Usman will once again be in the same spot on Saturday as, Francis Ngannou (16-3 MMA, 11-2 UFC) faces former teammate Ciryl Gane (10-0 MMA, 7-0 UFC) in a heavyweight unification bout, which will be his first defence of the belt.

Although Usman has only been able to be an occasional spectator to Ngannou ahead of UFC 270, he stated in an interview with MMA Junkie that he’s seen enough to know if his fellow champion is ready mentally and physically.

“I’m seeing a stone-cold killer. This is how Francis is every fight. It’s something very, very rare when you have a guy this big. Whenever Francis Ngannou walks into a room, everyone knows Francis Ngannou is in the room. I see him he’s calm and he’s ready to step in there.”

How does Kamaru Usman see the fight going?

Usman (20-1 MMA, 15-0 UFC) further adds that his primary focus on fight night is to bring “good energy” to Ngannou.

Ngannou’s head coach Eric Nicksick, commented on how important the presence of Usman is to their camp, on the UFC’s ‘UFC 270 Embedded‘ series.

“Having Kamaru here man just makes the team feel complete you know”. Nicksick further stated, “He’s been part of the camps along time, and he brings obviously a championship mindset but moreover I think he brings a lot of camaraderie and composure to Francis, there’s a brotherhood there.”

However, Usman decided to stay away from predicting any outcome of the UFC 270 main event. He believes it will come down to who executes best on the night.

Who do you think takes home the Heavyweight crown at UFC 270?