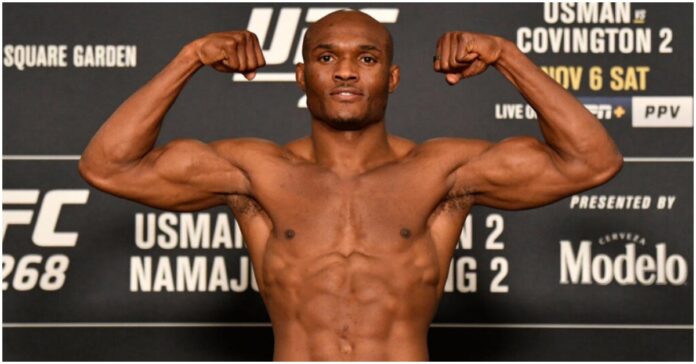 Kamaru Usman has revealed that he entered his rematch with Colby Covington with a pretty severe injury.

‘The Nigerian Nightmare’ claims to have broken his right hand three weeks before he went the full 25 minutes with ‘Chaos’ for the welterweight title.

Usman emerged victorious via unanimous decision and showed no sign of being compromised in what was one of the tougher fights of his MMA career.

During a recent interview with The Nelk Boys, Usman revealed that he broke his hand while sparring with UFC lightweight contender, Justin ‘The Highlight’ Gaethje.

Who Is Next For Kamaru Usman?

The 34-year-old has now made four defences of the UFC welterweight strap and appears to be running out of people to fight.

Leon Edwards appears to be next in line after picking up nine straight wins inside the Octagon. The Englishman was due to face Jorge Masvidal at UFC 269 but ‘Gamebred’ withdrew from the bout with an undisclosed injury. ‘Rocky’ opted against accepting a replacement opponent and is now hoping he will get the next crack at Usman.

The champ appears to be lukewarm on the idea of rematching Edwards who he beat via decision back in 2015. Usman instead hopes to cross over into boxing for a fight with the undisputed super-middleweight champion, Saul ‘Canelo’ Alvarez. However, the bout seems far-fetched with the Mexican superstar seemingly dismissing the idea and Dana White advising his fighter against facing Canelo.

Who do you want to see Kamaru Usman fight next?