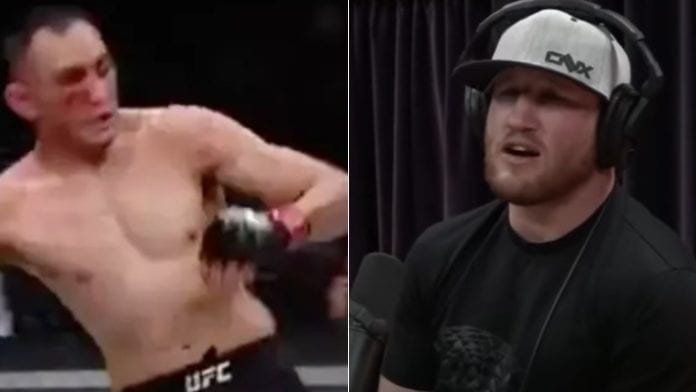 One of the biggest talking points of the interim lightweight title fight at UFC 249 earlier this month was how many of Justin Gaethje’s shots Tony Ferguson was able to take.

Gaethje landed over 140 significant strikes, 100 of which were to the head, with many of them appearing to be fight-ending shots. However, Ferguson absorbed the large bulk of them until his body could take no more in the fifth round as referee Herb Dean called an end to the contest.

Regardless, “El Cucuy” was never knocked out cold and received heaps of praise for his chin, endurance and heart to take so much punishment. Given that Gaethje had previously knocked out his last three opponents in the first round, was he stunned at Ferguson’s durability?

He claims otherwise as he wasn’t thinking about that during the fight, even if there was one moment where he felt Ferguson would go to sleep. But at the same time, he also doesn’t understand how some of his punches ended up resulting in recent knockouts.

“In the fight, there’s no point where I even understand [how he’s taking those shots]. No,” Gaethje said on the Joe Rogan Experience when asked if he was stunned. “It was crazy. The shots I hit [James] Vick, [Edson] Barboza and [Donald] Cerrone with? I was so surprised they went to sleep. I didn’t understand why. I think it was position mostly. When I was hitting him [Ferguson] with some of those shots, especially the one when I came through and he was throwing an uppercut, I couldn’t believe he didn’t go to sleep with that.

“But I go back to the Michael Johnson fight when he hit me with that left hand, there was no reason for me not to go to sleep then so I haven’t figured that part of the equation out. … It was everything a knockout shot should be. I know how people go to sleep, I don’t know how people don’t go to sleep.”

What do you make of why some people go to sleep and others don’t with certain punches?