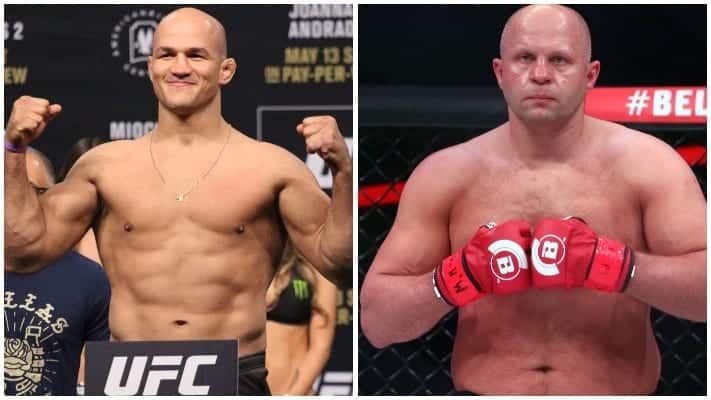 Junior dos Santos has expressed an interest in joining Bellator.

Dos Santos was released by the UFC earlier this month after losing four consecutive fights. His most recent setback came in December when he suffered a second-round TKO defeat to Ciryl Gane. The Brazilian had complaints about the nature of the finish — with Gane appearing to illegally elbow him — ‘JDS’ has now appealed against the loss.

In an interview with AG Fight, dos Santos seemed determined to keep fighting and highlighted a potential match-up with Emelianenko.

“I am a big fan of Fedor and it would be something really cool to be able to face him,” dos Santos said. “I don’t know what his situation is, if he’s still fighting and I know he’s at Bellator. Bader who called us, who would welcome us, would be very interesting. He’s a really tough guy too. A rematch against Alistair Overeem himself, who always finds a way to get away from this issue. It can be at Bellator, wherever it is.

Emelianenko hasn’t fought since knocking out Quinton ‘Rampage’ back in December 2019. One reason for that — other than the COVID-19 pandemic — is the fact that Bellator president Scott Coker would like to have the Russian’s final two fights on a grand stage rather than with no fans in attendance.

If the right offers don’t come in MMA, dos Santos will crossover into boxing.

“I’m taking the time to analyze the situation and choose the next step with more certainty,” dos Santos said. “I have proposals, opportunities within boxing too, which is my life’s passion. Of course it needs to be interesting for everyone and I think it would be incredible if it really is something that can be valid. It will be pretty cool. I always had that desire. When I focus only on boxing, I guarantee myself a lot. I really like the noble art.”

Do you want to see Junior dos Santos fight Fedor Emelianenko under the Bellator banner?