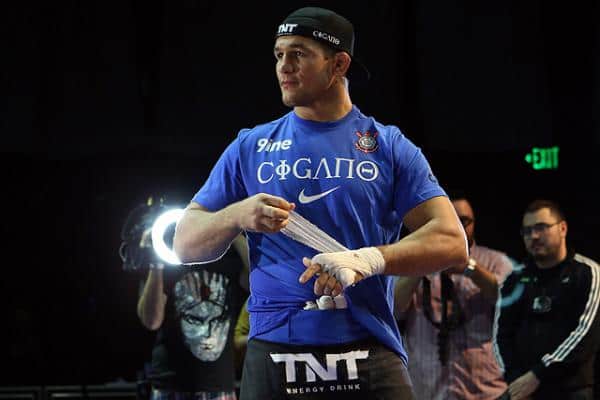 The long-awaited collision between former UFC heavyweight champ Junior Dos Santos and K-1 king Alistair Overeem draws ever closer. The two have been embroiled in a back-and-forth that pre-dates UFC 160, and ‘The Demolition Man’ has been one step ahead in the battle of trash talking. Yesterday he called JDS ‘afraid’ to face him, and now it looks as though the Brazilian banger has finally heard enough.

Not usually known for his rap battles, ‘Cigano’ has fired back at Overeem’s claims on Twitter, and even drops a steroid jive in there for good measure, check it out:

But it’s true right? I love the idea to make it clean specially with this guy. So #USADA do it. https://t.co/rdPALapq3f — Junior Dos Santos (@junior_cigano) August 17, 2015

You’ll remember that ‘The Reem’ famously fled from a drug test, later getting caught with extract of Predator 2 in his bloodstream. Dos Santos’ USADA (United States Anti Doping Agency) crack does raise an interesting point though; has Alistair Overeem lost his brutish KO power?

I’d say he definitely is a lot more patient now, less reckless, as we saw against Frank Mir and more recently Stefan Struve, the latter of which he KO’d in dominant fashion. With the cut in size comes a better gas tank you’d imagine, but has his chin healed up enough to deal with the world class boxing of the heavy-handed ex-boss?

It’s fair to assume that all these answers and more will come to light soon, so stay with LowKickMMA for more news and updates in the world of MMA and the UFC.