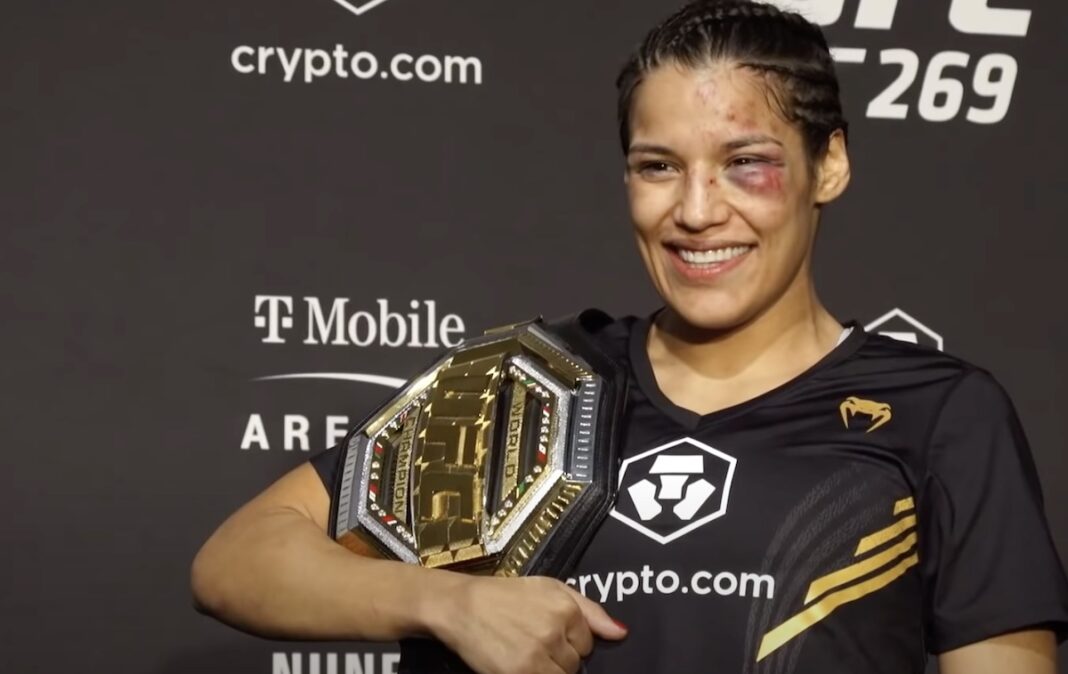 Julianna Pena disagrees with the notion that Amanda Nunes quit at UFC 269.

‘The Venezuelan Vixen’ scored arguably the biggest upset in MMA history when she beat up and tapped out the now-former dual-weight champion this past weekend.

Since then, some observers including Chael Sonnen have suggested Nunes checked out at UFC 269 and gave up on herself before Pena even had her rear-naked choke fully in.

During a recent appearance on The MMA Hour, Pena refuted those claims and insisted her choke was very tight before saying ‘The Lioness’ had no choice but to tap.

“[My coach] Rick [Little] and I have been working this choke for a while, and it was the same pretty much as I got with Sara McMann,” Pena added.

Julianna Pena Almost Submitted Amanda Nunes In Round One

Pena endured a tough first round at UFC 269 but she believes as soon as the fight hit the floor she had Nunes in all sorts of trouble even though she was in bottom position.

“It was in the first round,” Pena said. “It looked like the naked eye – I mean, these are million-dollar cameras, and they’re great, but you would think that they would get the shot of, like, I’m about to snap this girl’s arm, I’m about to have the first-ever victory by straight armlock. That’s what was playing in my mind. People are probably like, ‘Oh, she’s going to choke her,’ but I’m like, ‘Dude, her arm is going to snap in half. I have her arm.’ I wish people could see that; I don’t know if they saw it or not, I haven’t seen the full fight yet.

“I had her in trouble in Round 1, and I knew that’s the moment. I was like, man, if this is how our grappling exchanges are going to be, I can do this all night long, and especially the amount she was breathing. She was just like, [panting], and I’m just, cool.”

Do you agree with Julianna Pena? Did Amanda Nunes have to tap at UFC 269?