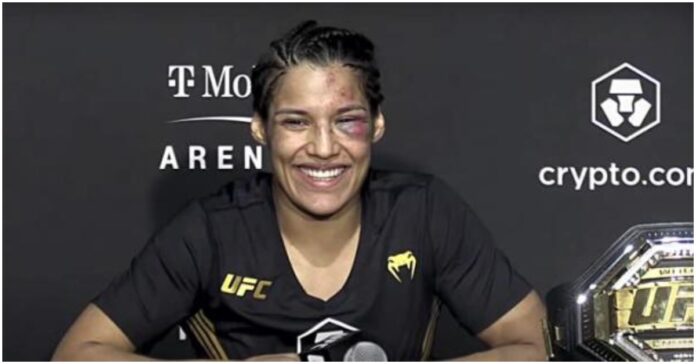 The UFC Bantamweight champion Julianna Pena is making headlines and not because she’s just a month removed from arguably the biggest upset in the history of the sport.

Pena went on The Joe Rogan Experience on Spotify this week with the episode coming out yesterday and expressed some strong views about the COVID-19 pandemic.

“I listened to (your) podcast with the two doctors, back-to-back – Robert Malone and (Peter McCullough). I mean, that was eye-opening for me,” Pena told Rogan. “I’m a massive conspiracy theorist on this whole thing, and I have been since the very beginning. I’m like, ‘This is just a money grab. This is – they’re trying to kill us, and this is ridiculous.”

Rogan was surprised at these comments and made it clear he didn’t think they were trying to kill people. The virus itself has infected over 70 million people in the United States and contributed to over 800k deaths as well.

The Joe Rogan Experience is the most popular podcast in the world so it’s not surprising when something like the Covid comments made by Pena here made headlines everywhere. Pena, who’s had Covid-19, did not indicate what her vaccination status was but did make it clear she was against the mask mandates as well.

Pena is coming off one of the biggest upsets in the history of the sport, submitted the then Bantamweight champion, Amanda Nunes, in spectacular fashion. The bantamweight duo are expected to rematch later this year but may first be coaches on the latest Ultimate Fighter season.

What do you make of Julianna Pena’s comments on JRE?