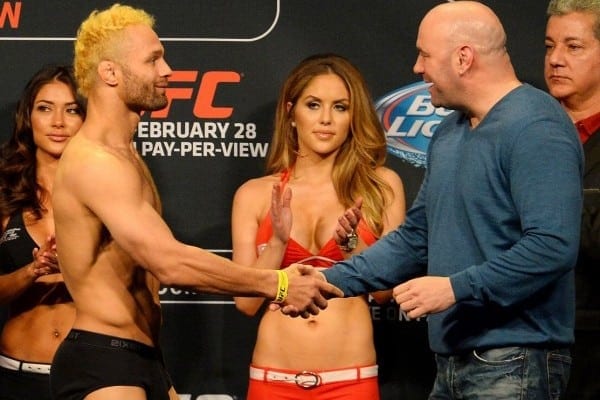 Many thought that former welterweight title challenger Josh Koscheck could be headed for retirement after a brutal submission loss to Jake Ellenberger at last Saturday night’s (Feb. 28, 2015) UFC 184 from Los Angles, California, but they apparently couldn’t be more incorrect.

According to a report from Combate, Koscheck will step in on very short notice to replace the injured Ben Saunders against Erick Silva in the co-main event of March 21’s UFC Fight Night 62 from the Macaranazinho Gymnasium in Rio de Janeiro, Brazil.

The FOX Sports 1-aired card features Demian Maia vs. Ryan LaFlare in the main event, and has been badly ravaged by injuries as Raphael Assuncao, Josh Thomson, Matt Wiman, and Saunders have all pulled out of their respective bouts.

After a four-fight losing streak against some of the best in the world in Johny Hendricks, Robbie Lawler, and Tyron Woodley, time could be running out for Koscheck. He’ll look to rebound against a talented competitor in Silva, who has seemingly failed to live up to his massive hype and potential.

The 30-year-old Brazilian has shown similar inconsistency in the Octagon, most recently submitting Mike Rhodes in the first round at December’s UFC Fight Night 58 to pick up his sixth post-fight bonus in seven bouts. But he’s largely faltered against all of the top competition he’s faced, including Matt Brown, Dong Hyun Kim, and Jon Fitch. “Indio” has also traded victory and defeat in all nine of his UFC contests.

Airing on FOX Sports 1, UFC Fight Night 62 features Demian Maia vs. Ryan LaFlare in the main event, and has been badly ravaged by injuries as Raphael Assuncao, Josh Thomson, Matt Wiman, and Saunders have all pulled out of their respective bouts.

Now “Kos” has saved the day. Will he get back on track with a win or will he inch one step closer to retirement?