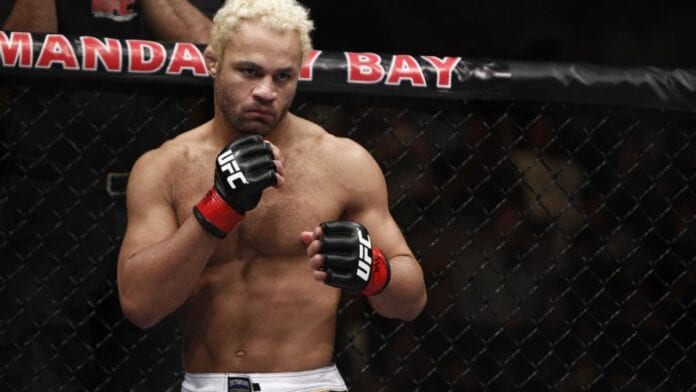 It seems as if struggling UFC veteran Josh Koscheck has found himself a new home as it was announced on tonight’s (June 26, 2015) broadcast of Bellator 139 on Spike TV that Koscheck had signed with the UFC’s “biggest” competition.

“Kos” made a name for himself on the first season of The Ultimate Fighter as one of the UFC’s original bad boys with his feud with fellow cast member Chris Leben. He hit the height of his career when he challenged former UFC 170-pound kingpin Georges St. Pierre for the title at UFC 124 in 2010, ultimately coming up short.

However, at one time Koscheck was amongst the elite at welterweight owning wins over legends Matt Hughes and Frank Trigg and veteran Diego Sanchez. The TUF 1 alum has fallen on hard times as of late, losing five-straight bouts, four by finish, and apparently he has received his walking papers from the UFC.

At 37 years old, Koscheck will look to make noise in Bellator’s 170-pound division, and the former UFC title challenge already knows what he wants, as there may be a huge rematch for him on the horizon. He took to his official Instagram to break the news, calling out British lightweight Paul Daley in the process. The two met at UFC 113, with Koscheck taking a dominant unanimous decision, but Daley infamously sucker punched him after the bout, and it looks as if “Kos” is out for revenge:

Started my career on #SpikeTV & I’m going to finish my career here!!! Thank you @ScottCoker for believing in me! Only thing I want to do next… is bitch slap Paul Daley one more time!! Remember the ass kickin I gave you?!! @bellatormma @spiketv @spike

He may be leaving the UFC, but he’s definitely taking his brash, trash-talking personality with him. Does Koscheck have anything left in the tank?