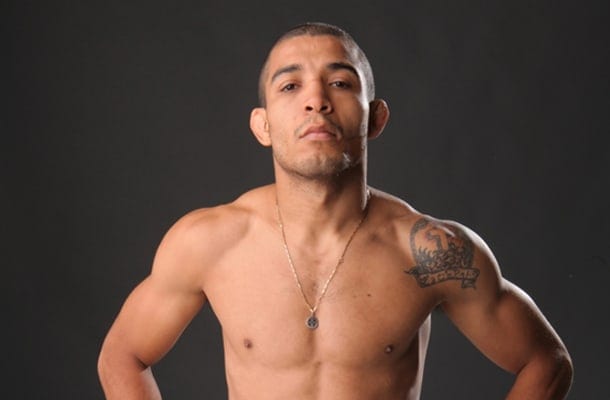 UFC featherweight champion Jose Aldo will return to action at UFC 189, facing bitter rival Conor McGregor with the title on the line. The two have shared a ferocious back-and-forth in the media, often spilling over to their press conference staredowns. ”The Notorious’ may represent the biggest threat to Aldo’s belt yet, but it’s still a different fight that ‘Junior’ is involved in outside of the UFC octagon.

Many times Aldo has spoken about poor working conditions for fighters in the UFC, and the subject has reared it’s ugly head again. This time, the debate is about the UFC’s highly controversial sponsorship deal with sports giant Reebok. The deal has hit a lot of fighters very hard, meaning they’ll be bringing home a whole bunch less money in sponsorship checks, something that Aldo tells Combate via MMAFighting.com is just wrong:

“First of all, it’s s**t. Everybody has been talking about it,” said Aldo. “We, athletes, are losing a lot. They said we would be like NBA or NFL athlete, but that doesn’t apply, because we are not paid monthly like they are. It doesn’t matter how much we will be paid, all athletes who had sponsors are losing money.”

“If we are going to talk about something, that does not depend on just me being the champion, or [UFC heavyweight champion] Cain Velasquez, or any other champion,” said Aldo. “If we had a union for fighters, and we were all together, like in the NBA, this would’ve been different, but fighters are not united.”

The deal has been widely bashed since the promotion finally released the numbers associated, and there really isn’t anyone benefiting from the deal that is outside of the champions of each division, the longest serving fighters, and potentially some of the big wigs in the Zuffa brass. Aldo continues:

“Today I have a price the event is willing to pay to have me, but there are other fighters out there willing to fight for spare change if I don’t want to, and that is not even their fault. The UFC brought the sport to where it is today, great, that’s their merit. But if athletes were more united and had a union to protect them, I don’t think this would happen.”

“It gets really bad for up and comers or guys who are trying to reach the top,” said Aldo. “I’m not talking about me, I’m all right, I’m the champion and I have a high price. Aldo hasn’t become the champion now, he has been the champion for years. But for the beginners, it’s really bad.”

A fighter union has been the subject of much debate for years now, with little actually occurring in the form of one materializing. With a private limited company like Zuffa, the sad truth for most fighters is that they’ll never get rich working for the UFC. The select few that do though, Anderson Silva, GSP, Cain Velasquez etc. will remain tat way, in the minority.

Yet again the Brazilian champion is calling out, like many of us, for a change in the way fighters are rewarded. The problem is that there has been a change in recent times, but the common opinion is that the change was not positive.