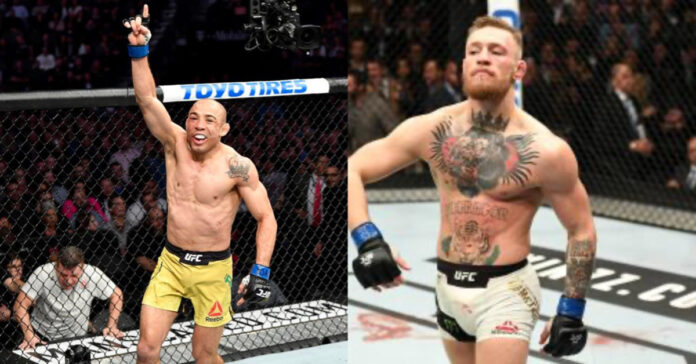 Jose Aldo shared a hilarious story about Conor McGregor drunk calling him from his private jet.

The matchup between Aldo and McGregor was absolutely legendary. McGregor was at the peak of his hype, and the trash talk between the two was endless and hilarious. Aldo on the other hand was the most dominant fighter at the time, and considered to be the best pound-for-pound fighter in the world.

McGregor cemented his legacy in the UFC by knocking out Aldo, just seconds into the bout. McGregor was able to catch Aldo while he was advancing in and knocked him out for the first time in his career.

To many fans and even current champion Alexander Volkanovski, Jose Aldo is the featherweight GOAT. It is unfortunate that we never got to see Aldo and McGregor go toe to toe after McGregor ended the first fight in such a quick and devastating fashion. That knockout is one of the greatest moments in the sport’s short history, and spiked the UFC and McGregor’s popularity very quickly.

Jose Aldo revealed that he is actually pretty friendly with McGregor and doesn’t mind the trash talking he does.

“It was funny because the guy drinks a lot. He drinks a lot. Fu*k yeah, he probably even likes to drink gasoline,” Aldo said. “Bro, he would call our private jet completely drunk, just talking shit. Fu*k, it was so funny. He’s a good person. Because he does understand the other side. He understands the other person. But he’s a guy with vision.” (Transcribed by Brobible)

Jose Aldo lost his last fight against Merab Dvalishvili, and it looks as if the former featherweight champion may be retiring. He came up short on his recent run back into title contention, but his legacy will live on forever.

Did you enjoy Aldo’s story?