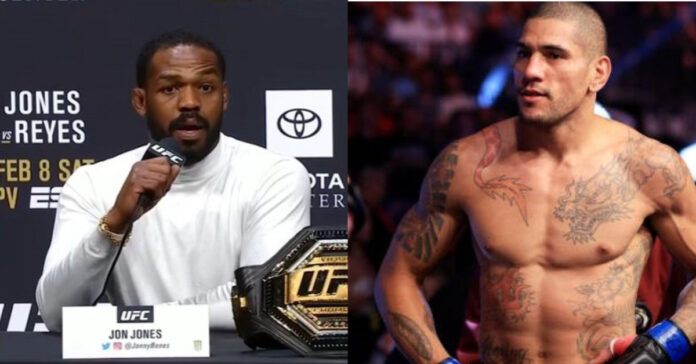 Jon Jones has some advice for Alex Pereira, after he viewed his sparring session on social media.

Jones knows a thing or two about fighting in a high stake, championship bout. Jone became the youngest UFC champion ever, when he claimed the light heavyweight title at the age of 23. Jones beat MMA legend ‘Shogun’ Rua for the title, in just his eighth fight with the organization. Pereira on the other hand, is a legendary kickboxer, and already has his first UFC title shot in just his fourth fight with the UFC.

Pereira has already bested Israel Adesanya twice, in their days as kickboxers. Adesanya has not lost in the middleweight division, since he has joined the UFC. His reign of dominance has lasted years now, as he has beat the best of the division, multiple times now. Pereira still has a way to go, as he still has over 40 pounds to cut before the fight.

A picture of Pereira and light heavyweight fighter, Dominick Reyes, was circulating around social media. The picture of the two men, shows just how big of a fighter Pereira really is.

Jon Jones advice to Pereira was very short and simple

“Be careful not to show Izzy too much champ, I honestly don’t think it will matter though,” Jon Jones commented on a post of Pereira sparring. “It’s yours.” (Transcribed by MMAFighting)

It seems as if Jones is putting his money on Pereira, but there is really no surprise there. For years it was rumored that Adesanya and Jones may face each other in a light heavyweight championship fight. They had a rivalry via social media posts and jabs via interviews, but ultimately the fight never happened. If Adesanya never lost to Jan Blachowicz for the light heavyweight championship, we may have seen the fight already.

For now, we will have to “settle” for watching Adesanya and Pereira headline UFC 281, for the middleweight title.

Who do you think wins between Israel Adesanya and Alex Pereira? Would you like to see either man face Jon Jones in the future?