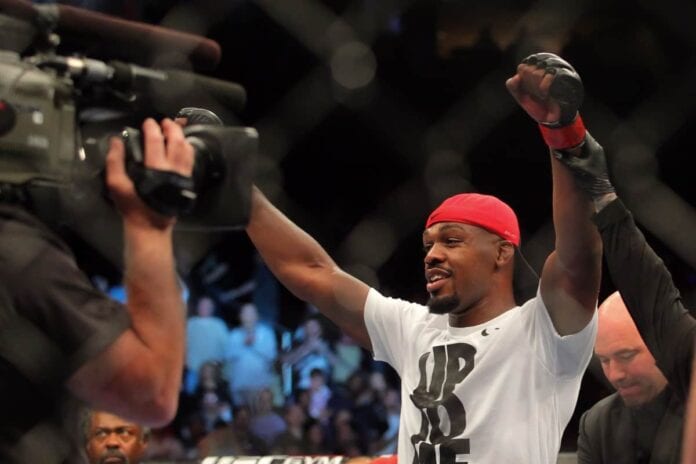 For UFC light heavyweight Jon Jones, it’s been a gradual transformation from the role of a religious, mild-mannered prospect to the both loved and hated heel persona he maintains now but the world’s No. 1-ranked pound-for-pound fighter appears to be finally flourishing with it.

He was undoubtedly portrayed as the enemy during his infamous UFC 178 media day brawl with Daniel Cormier, and that has not surprisingly followed him into his rescheduled UFC 182 main event against “DC” this Saturday (January 3, 2015) from the MGM Grand Garden Arena in Las Vegas, Nevada.

Earlier this year, Cormier stated that Jones should just embrace his bad guy role, and it appears that UFC President Dana White is starting to agree with him. Speaking on FOX Sports Live last night, White said he thinks Jones should just roll with punches:

“I think he should embrace it. He’s kind of come off like the bad guy in this thing. All the stuff that happened behind the scenes, when they were doing the interviews after the fight in the MGM lobby, Jones was 100 percent the bad guy.”

That may sound like White is endorsing a heel turn from Jones, something that may have already taken place. But as a shrewd businessman, White obviously knows that MMA needs its bad guys, and Jones could actually bring in bigger pay-per-view (PPV) numbers playing that role.

For his part, Jones admitted during the UFC 182 media conference call this Monday that he was resistant to the role at first, but is now accepting it slowly. He focused on the fact that he is still a Christian, but also acknowledged that he has an edgier side that came out during his profanity-laced “hot mic” session opposite Cormier:

For that hot mic to come out and for people to see that side of me, it was kind of a relief. Because it’s like, you know what? I am a Christian and I do try to carry my image in a certain light, because I think it’s important for the people I inspire and for endorsements. But at the same time, this is who I am. I will swear. I will tell a guy who told me he would spit in my face that I would kill him. I would call him the names I called him.”

It’s refreshing to see Jones grow into his true self, because there’s been endless talk about him being “fake” that seemingly began prior to his UFC 145 win over former friend and training partner Rashad Evans.

That reputation was only amplified when Jones refused to fight Chael Sonnen after Dan Henderson was forced out of UFC 151 with a knee injury, resulting in Jones being publicly painted in a poor light. According to Jones, that was when he knew he would be portrayed as the enemy:

“It’s just the UFC. UFC 151 got cancelled and instantly my image got ruined overnight. That taught me a lot, it really did, about the UFC. So, them using that to promote fights, it doesn’t surprise me. I’m just gonna go with it. It’s what I said, it’s my quotes and I’ll live with it.”

That could be the best course of action for Jones, who, like Mayweather, is going to have his fans and haters regardless of what he says. He seems calm and confident heading into quite possibly the biggest bout of his illustrious career this weekend.  Settled into his accepted role as the bad guy, Jones could definitely turn that into major dollar signs heading into 2015.

But he’s going to have to get by Cormier first, something that he doesn’t seem too worried about. Should he be?