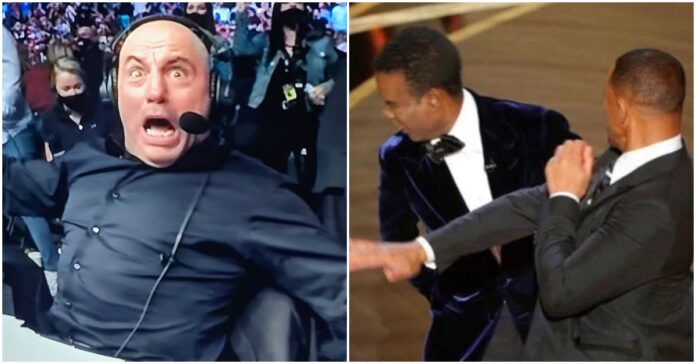 Joe Rogan believes a dangerous precedent has been set after Will Smith climbed onto the stage at the Oscars and slapped Chris Rock because his wife didn’t like a joke the comedian told.

During a recent JRE episode, the MMA legend and popular podcaster expressed his disbelief at the fact Smith assaulted someone on live television and was able to continue being a part of the award ceremony, picking up the Best Actor award mere minutes after his attack.

“It was a rare instance where someone is so enormously famous and successful like Will Smith that they literally still allowed him to not just win the Academy Award but also go up and accept it and give a speech after he assaulted a small comedian,” Rogan said on Tuesday’s episode of his show.

Joe Rogan Is Worried About The Precedent Set By Will Smith

The fact Smith has faced zero repercussions for assaulting someone in front of millions of people for a pretty tame joke doesn’t sit well with Rogan.

“I don’t necessarily think people are going to change their behavior but dumb people might,” he added. “But also, it’s like what are we saying as a society when the people that we look up to, for whatever reason, for good or for bad, we look up to actors. And the Academy Awards is supposed to be them in their most regal- their most regal outfits, their best behavior and to drop down to violence for something so innocuous as a G.I. Jane joke. This is a nonsense scene where you’re allowed to just go smack someone!” (Transcribed by Mediaite)

Do you agree with Joe Rogan on the Will Smith – Chris Rock incident?