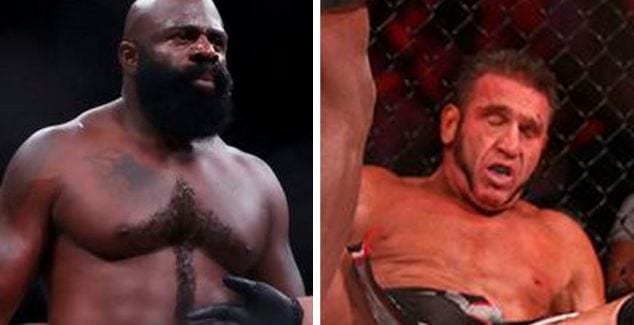 It’s thankfully not too often that we see MMA (mixed martial arts) fights that are obviously rigged. The world of professional boxing hasn’t been as lucky, with years of down right scandalous mischief ruining the sport’s legitimacy, grinding down it’s fanbase over the years and leading to many believing that the age-old tradition of great boxing is already dead. One man that knows about pro boxing and MMA is Kimbo Slice, the Bellator 138 headliner was involved in some seriously controversial pugilistic abominations during his 7-0 stint as a boxer, none more so than his bout with Brian Green.

Green was clearly winning the fight over a tired Slice heading in to the fourth round, with the street fighter barely able to throw any strikes of significance at all. All of a sudden Kimbo manages to string together three arm punches, all sloppier than custard in a Navy mess hall, and Green goes down like a sack. Sound familiar? Ken Shamrock played the role of Brian Green at Bellator 138, seemingly ‘unable’ to pull of a gimmee choke after taking Kimbo’s back, and going down from the first real strike thrown in the fight.

You know how we feel about the ‘fight’ here at LowKickMMA, and Scott Coker‘s description of the fight is more like a witness statement. And UFC color commentator  Joe Rogan is about as frank as the rest of us with his assessment of Slice vs. Shamrock. Check out what he had to say about the ‘fight,’ transcribed by MMAMania.com:

“I gotta tell you right now, that fight looked fake as fuck. There’s a couple of things I don’t like about that fight. I don’t like that clinch, that long clinch that they had where they were mouth to ear. They were mouth to each other’s ears for a long time… How about the fact that when Ken [Shamrock] did take him down he never hit him once? How about that? He never hit him! He had him down, he had him flattened out, he had his back and he’s not crashing him. He’s not blasting him with punches. He’s got him flattened out and he’s not hitting him. That doesn’t make any sense to me.”

I seem to remember Bellator CEO Scott Coker saying something along the lines of ‘well you may call it a freak show, but everyone is watching, right?’ Yes Scott, everyone did watch, and if all you were looking for was to get everyone tuned in for one bullcrap event and the subsequent payoff, and then off to the MMA graveyard with Bellator MMA, yes, you did it buddy.

Rogan calls it spot on, Kimbo vs. Shamrock was a theatrical, already mismatched, joke of a display. They bumped an unhappy Patricio Freire from the top spot to exhibit a disgraceful mockery of the sport in the main event, and were thoroughly showed up this weekend by a UFC card on Fight Pass, which Bellator arguably outweighed in the talent and drawing power department.

Perhaps the single opportunity that the Coker-led cockfight promotion had, in the form of Bellator 138, and they blew their load on Ken Shamrock’s return to pro wrestling.