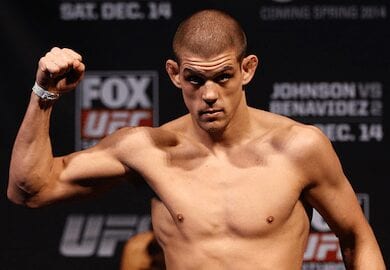 As if July 25’s UFC on FOX 16 wasn’t exciting enough with the headlining TJ Dillashaw vs. Renan Barao bantamweight title rematch and the return of former lightweight champion Anthony “Showtime” Pettis, the card has now added a match-up between two of the most exciting veterans in lightweight division history.

All-time UFC bonus record holder Joe Lauzon will return to the Octagon to face former Pride star Takanori Gomi on the stacked card from the United Center in Chicago, Illinois.

Lauzon lost his last bout to up-and-coming prospect Al Iaquinta at January’s UFC 183. The loss snapped a two-fight win streak that saw him beat Michael Chiesa by doctor’s stoppage in UFC Fight Night 50’s “Fight of the Night” last September after he outpointed Mac Danzig at UFC on FOX 9. The exciting 10-year UFC vet has gone 3-3 since his head kick loss to Pettis back at UFC 144.

He’ll attempt to get back on track against the 36-year-old Gomi, whose success in his native Japan hasn’t exactly translated over to the UFC. Gomi has gone 4-5 under the promotion’s banner, losing his most recent bout to touted young talent Myles Jury at last September’s UFC Fight Night 52 from Saitama, Japan.

The loss sent him to his second defeat in three fights, but many would argue that his UFC on Fuel TV 8 split decision loss to Diego Sanchez definitely should’ve gone the other way.

In any case, it’s most likely do-or-die time for Gomi in the stacked UFC lightweight landscape.

The potential 155-pound barnburner joins the two previously announced lightweight bouts of Erik Koch vs. Ramsey Nijem and Danny Castillo vs. Rustam Khabilov. Here’s a full rundown of the UFC on FOX 16 lineup as it currently stands: