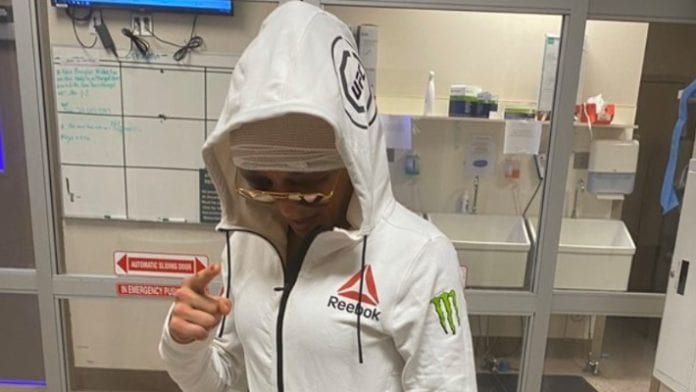 Weili Zhang and Joanna Jedrzejczyk appear to be alright following their UFC 248 war.

The duo battled for 25 minutes in a back-and-forth contest in the co-main event on Saturday in what many are calling the greatest fight in women’s mixed martial arts history. In the end, Zhang came out on top winning via split decision to retain her women’s strawweight title.

However, the stocks of both fighters went up as they left it all in the Octagon and were later transported to the hospital.

Jedrzejczyk notably donned a huge hematoma on her forehead which continued to swell as the fight went on. By the end of the 25 minutes, Jedrzejczyk was almost unrecognizable. However, she suffered no significant injuries and was discharged from the hospital on Sunday morning:

“”Joanna Jędrzejczyk was just discharged from the hospital, according to her team,” ESPN’s Ariel Helwani wrote on Twitter on Sunday morning. “No significant injuries, they said. Here she is leaving moments ago.”

Zhang, meanwhile, was also discharged from the hospital. She suffered no significant injuries either but did have swelling in her feet and ankles:

“Zhang Weili was just discharged from the hospital, per her manager Brian Butler. No significant injuries, he said, other than swelling in her feet and ankles.”

Given the success of the first fight, we might be in store for a rematch.