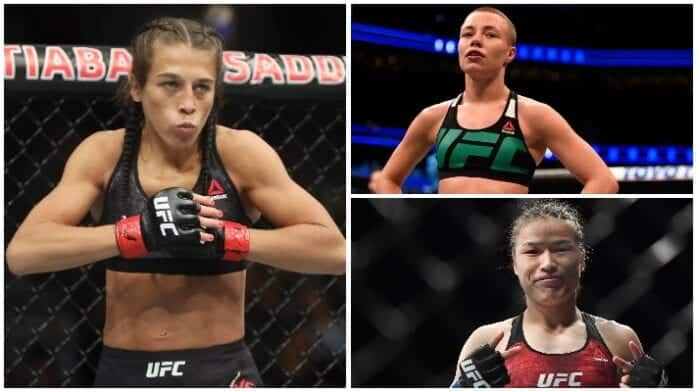 Joanna Jedrzejczyk wants her belt back.

The former UFC strawweight queen has been busy outside of the octagon since her fight of the year performance against Zhang Weili last year. Spending most of the pandemic in her native Poland, Jedrzejczyk has spent the time pursuing other business opportunities. She’s served as a judge on a Polish dance competition show and is writing her autobiography. Still, her desire to regain what’s she lost is strong. In a recent interview with MMA Fighting, Joanna opens up about what’s she has been up to and what she wants next.

“I’m living my best life,” she shared. “With my personal or business problems, we all have it, and I’m very happy. I take everything that’s happening in my life, and I give a lot. I give 100 percent every single day in everything I do, but I did as much as I can. I’m still an athlete because I really want to do it, but I set my priorities. I have different priorities. I don’t want to be part of this crazy rat race because I was there.”

These new endeavors outside of the octagon have not swayed the former champ away from her unfinished business within it. She asked the UFC for the rematch with whoever comes out of UFC 261. “I want to get the winner of this fight,” said Jedrzejczyk.

“I won’t stop. That’s the thing if I was losing fights by knockout or if I was losing the fights on points and the difference was big but it’s not. I always put on a show and the fights are very close so I want to keep on going.”

“I called Mick [Maynard] a few days ago and I just told him ‘You know what? The baddest b*tch on the planet is back’ so book the fight, watch this fight and tell everybody that I’m next,” Jedrzejczyk said.

“I was waiting for this fight. It’s COVID time, so that’s the only reason why the belt was not stripped. Because once a year you have to defend the belt. But we’re having COVID times but when I was the champ, I was defending this belt like crazy.”

Jedrzejczyk knows that some think it’s inappropriate for her to get the next title shot. She lost her last attempt at regaining the belt in her Fight of the Year performance. But she believes that she has done enough to book the fight.

“I know there are so many people who are like ‘you lost, you have to prove it again.’ I proved it in my last fight, putting on f*cking hell of a show,” Jedrzejczyk said. “Giving the closest fight ever. That’s the thing, Fight of the Year, no gender, no weights. It’s the ticket for the next title fight. That’s the thing. I just don’t want to fight for nothing anymore. That’s the thing.

“If I fight, I fight for big trophies and I don’t have to prove it to anybody.”

Jedrzejczyk remains confident that she will win the rematch with either Namajunas or Weili, but didn’t go as far as to predict the winner of the title fight at UFC 261.

“I wish best of luck to both of them and I hope they will bring the strawweight division even higher than I did the last time with Weili Zhang,” she said. “But I feel like every time I step into the octagon, I break another barrier and limits and records. I did that many times with winning the belt, defending the belt and now with putting on such great shows.”

Do you think Joanna Jedrzejczyk deserves the next strawweight title shot?