Although most of the attention regarding next month’s (November 14, 2015) UFC 193 from Australia is being centered around dominant women’s bantamweight champion “Rowdy” Ronda Rousey, who defends her title against Holly Holm in the main event, fans must not forget that there is not only another title fight on the card, but another women’s title fight.

In the co-main event of the evening, growing star and strawweight champion Joanna Jedrzeczyk will put her title on the line for the second time against Canadian Valerie Letourneau.

“Joanna Champion” has taken the UFC by storm over the last year, and has become quite the entertaining figure. It all started when she met former champion Carla Esparza at last March’s UFC 185. It seemed as if many were leaning towards Esparza as the favorite, but Jedrzeczyk put her world class striking skills on full display, and ultimately walked away with the title.

She was then given a main event spot for her first title defense, as she took on one of the division’s best in Jessica Penne last June. Once again, the Polish champion showcased her skill yet, battering, and utterly destroying Penne on route to a one-sided finish.

Check out the full fight above courtesy of the UFC as UFC 193 nears closer.

Will Jedrzeczyk continue her reign as champion next month? 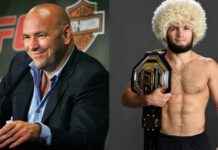