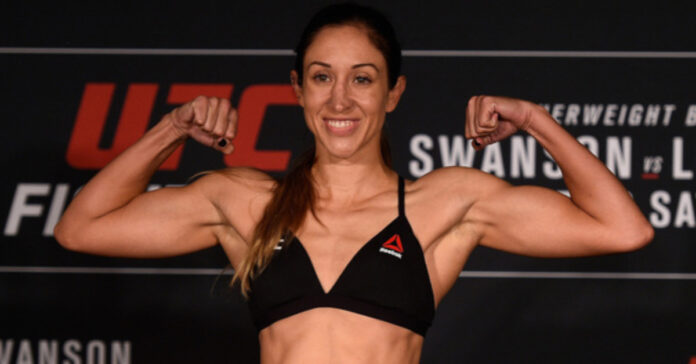 Jessica Penne has pulled out of her bout at UFC Vegas 61. The MMA veteran was scheduled to face Tabatha Ricci this Saturday but the fight was scrapped due to an illness.

UFC officials announced the cancellation at the beginning of Friday’s official weigh-ins. It has not yet been determined if the bout will be rescheduled or scrapped completely.

Jessica Penne Was A Replacement Opponent For Tabatha Ricci

Penne (14-6) originally stepped in on short notice against Ricci after Cheyenne Vismas pulled out due to personal reasons. The 39-year-old is coming off a unanimous decision loss against Emily Ducote in July. Before that, she scored wins over Karolina Kowalkiewicz and Lupita Godinez after a near 4-year layoff. Her past opponents also include Jessica Andrade, Joanna Jędrzejczyk and Michelle Waterson.

The cancellation was another rough patch in Penne’s UFC career. She has been flagged twice by the United States Anti-Doping Agency (USADA) in 2017 and 2019. The two suspensions resulted in a combined 38 months of non-competition time. Penne has denied any wrongdoing and has been outspoken about USADA. In January 2020, she said that USADA “effectively bulled and forced her” to retire.

The Penne-Ricci matchup was set to take place at the UFC Apex in Las Vegas. This weekend’s card garnered more attention due to the event being mysteriously closed to the public and media. The UFC has not released an official statement behind the closure.

Ricci (7-1) was preparing for her fourth UFC appearance. ‘Baby Shark’ was seeking a ranking next to her name with a win over No. 15 strawweight Penne. Ricci won her last two fights with victories over Polyana Viana and Maria Oliveira.