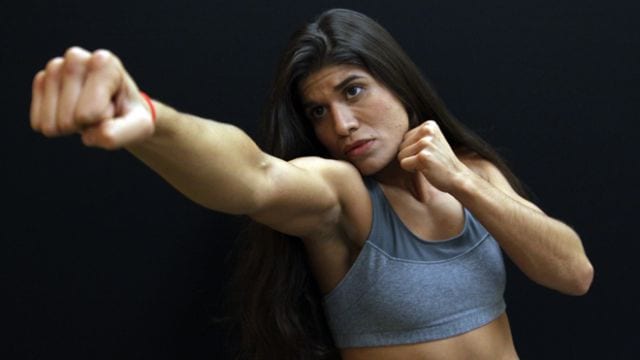 It looks like WSOF (World Series Of Fighting) will be looking for a new women’s strawweight champion, as news emerged today that the UFC has snapped up the promotion’s now former 115-pound queen. Jessica Aguilar is currently on a ten-fight win streak, notching victories over Megumi Fuji twice, former UFC inaugural strawweight boss Carla Esparza and Emi Fujino to name a few.

Having won the WSOF belt against Alida Gray at the promotion’s eighth show, she went on to defend the strap against Fuji and most recently Kalindra Faria at WSOF 15. Her opponent for her first fight under the Zuffa banner is none other than tough contender Claudia Gadelha, and will take place at UFC 190 on August 1st. ‘Claudinha’ is 12-1 in her pro career, losing only once to the current UFC women’s strawweight champion Joanna Jedrzjczyk (writing that never gets easier), in a bout that many felt the Brazilian had actually won.

So it could be the start of a great UFC career for Aguilar, although she is not getting any kind of grace in her first bout. Gadelha is for real, and will put the former WSOF champion’s skills to the ultimate test. UFC 190 takes place in Rio De Janeiro, Brazil, and is headlined by the women’s bantamweight title clash featuring rivals Ronda Rousey and Bethe Correia.

Also on the stacked card are old opponents and Pride FC legends Mauricio Shogun Rua and Antoonio Rogerio Nogueira. ‘Big Nog’ battles Stefan Struve, and Neil Magny takes on Demian Maia at welterweight. Check out how the rest of the UFC 190 card is shaping up, and stay tuned to LowKickMMA!