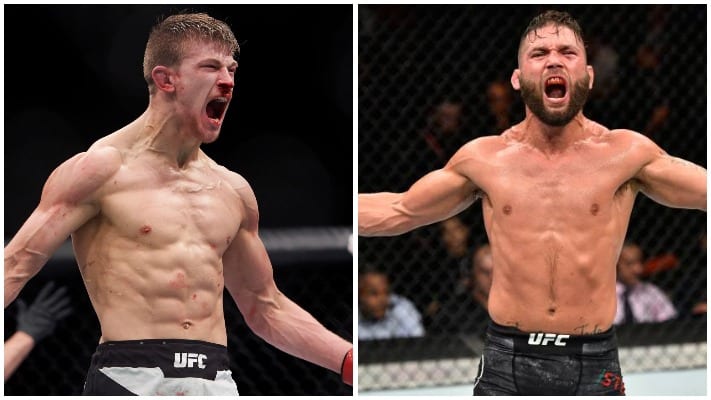 Jeremy Stephens and Arnold Allen are set to square off on November 7 according to MMA Junkie who report:

“Jeremy Stephens and Arnold Allen are on a collision course. The two featherweight notables are set to square off Nov. 7 at an event expected to take place at the UFC Apex in Las Vegas. Multiple people with knowledge of the situation informed MMA Junkie of the booking but asked to remain anonymous as the promotion has yet to make an official announcement.”

Long-time featherweight standout Stephens is looking to get back in the win column. ‘Lil Heathen’ hasn’t tasted victory in five fights, losing four and enduring a no contest against Yair Rodriguez. Stephens beat Josh Emmett back in February 2018 before his disappointing turn in form. The 34-year-old has a stacked record with plenty of high-profile wins over the likes of Rafael Dos Anjos, Sam Stout, Renan Barao and Gilbert Melendez.

At just 26 years old Allen is one of the younger contenders at featherweight. The Englishman has won seven straight since joining the UFC back in 2015. He holds significant wins over Nik Lentz, Gilbert Melendez, Mads Burnell and Makwan Amirkhani. Allen will be hoping to pick up the biggest victory of his career against Stephens on November 7.

Both men will be keen to make a statement. The current UFC featherweight champion Alexander Volkanovski has announced his intention to fight all contenders at 145lbs. It appears next in line will be the winner of Brian Ortega vs. Chan Sung Jung but after a shot will be up for grabs.

Who wins on November 7? Jeremy Stephens or Arnold Allen?