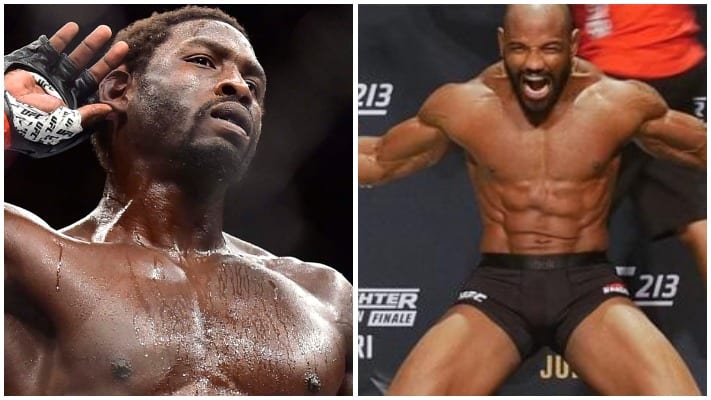 Jared Cannonier has a few options for his next fight but one name in particular in Yoel Romero stands out.

Cannonier entered title contention after his TKO win over Jack Hermansson in the UFC Copenhagen headliner last month. That result made it three knockout wins in a row for “The Killa Gorilla” since moving down from light heavyweight.

He is currently recovering from some injuries, but once he’s ready to compete again, he is looking for that one fight which will cement a title shot. For Cannonier, that’s former title challenger Romero.

However, there are other options such as the winner of next month’s UFC 244 bout between Kelvin Gastelum and Darren Till:

“I think… all of the above,” Cannonier told BJPenn.com. “I think a fight with Yoel Romero would put me right up there. He has gone 1-3 in his last four fights. Of course, they’ve been against champions or title contenders.

“I don’t know [what will happen]. I’m gonna let everything work itself out. I’m gonna let the managers and matchmakers work out what’s next. I’m with one of the best management companies, First Round Management, and they don’t pussy-foot when it comes to making big deals like this. I trust those guys with my career and I trust that they will come back with some lucrative numbers to say the least, or interesting fights.”

Cannonier’s rise since last year has been a meteoric one, especially considering he fought at heavyweight at one point. As he racks up the wins, he will continue to get new fans and he had a message for all of them:

“Welcome aboard,” Cannonier added. “If they’re talking about me being in these big fights, that’s enough for me because I believe I can win all of these big fights. When you put me in there, I’m going to act accordingly.

“Call it confidence, call me cocky, that’s my demeanor, that’s my approach, that’s my posture. I’m about to go win a fight. You know what it is. Let’s do this, and I’ll try to make things as quick and as painless as possible. So, welcome aboard. I believe you will be inspired with the way I move.”

Do you want to see Cannonier vs. Romero next?