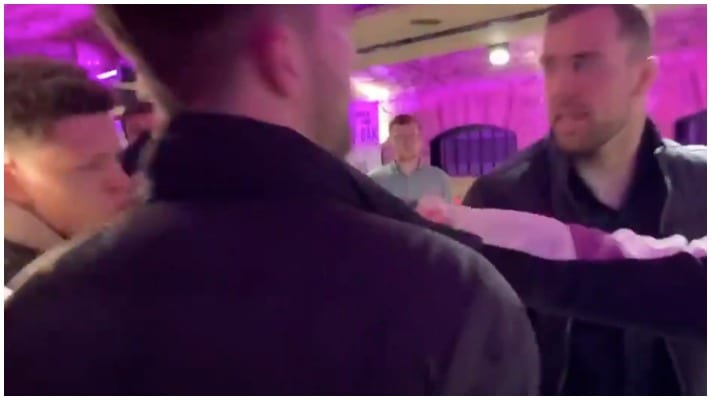 There was some drama involving James Gallagher ahead of Bellator London this weekend.

Gallagher will look to make it four wins in a row when he takes on Cal Ellenor at Bellator Dublin on February 22. And while he was only making an appearance for Bellator London media day, he almost came to blows with Mike Kimbel.

You can see the altercation below:

So James Gallagher and Mike Kimbel got into an altercation at the #BellatorLondon media day!

What caused the altercation?

“No talk, left hooks. My mother’s name will only be spoke about with respect,” he wrote on Twitter.

No talk, left hooks. My mother’s name will only be spoke about with respect. https://t.co/iotOjtaMa3

Kimbel is 3-2 in his professional career, having fought exclusively for Bellator. The 22-year-old lost his last outing in a TKO defeat to Chris Disoneil at Bellator 225 back in August.

It would seem unlikely that the two would meet in the cage given their respective records. However, if Gallagher wants to teach Kimbel a lesson, a fight between the two could very well happen in the near future.

What did you think of the altercation?