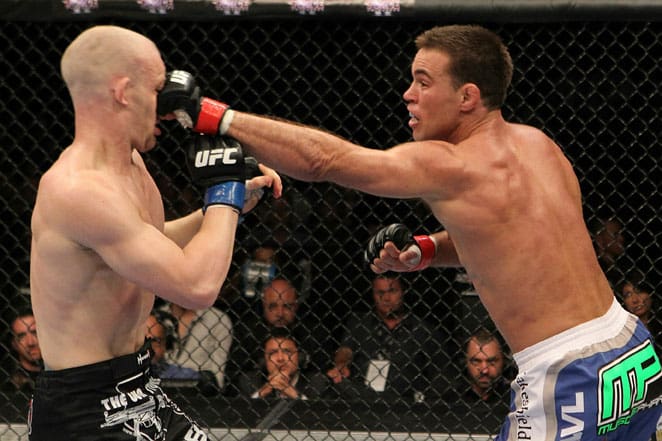 WSOF (World Series Of Fighting) welterweight title contender Jake Shields is pretty pissed about his recent fight with Rousimar Palhares, and with good reason. Although it’s all allegations at this stage, ‘Paul Harris’ appeared to not only hold on to the submission for too long again, he also is being accused of gouging Shields’ eyes during the fight. This gruesome image appears to support that theory.

WSOF 22 was the scene of the crime this past Saturday August 1st, and the welterweight champion ‘Toquinho’ may be getting stripped of the title following an investigation. Speaking with our good friends over at Submission Radio, courtesy of MMAFighting, Shields says he wants a rematch with Palhares:

“Yeah man, I want to fight the guy in the streets to be honest, because I want to gouge his eyes back, I want to bite him, I want to kick him in the balls,” said Shields. “I actually want to fight the guy. If I see him tonight I’m coming after him. I don’t like the guy. They’ve got rules and he’s not following the rules. I don’t know. I mean I’ll fight him again in a cage, but maybe I’ll stoop to his level if I have a s***ty ref.”

Not only Paul Harris is coming under fire, the referee Steve Mazzagati has been criticized for not taking action against the blatant fouls. Shields goes on to reveal that WSOF president Ray Sefo and Ali Abdel-Aziz were also rather unhappy with the whole mess:

“Yeah they say they blatantly saw the eye pokes as well. I mean they didn’t say what they were going to do, but they definitely were not happy. They were aware that he was cheating and they seemed very not happy. I mean I don’t blame them, they’re in a tricky situation.”

“It’s their champ, you know, like what do you do? Do you strip him or not? I mean I don’t know. Personally, I probably would, but that’s…..you know, I respect both of them. That’s a decision they’re going to have to make.”

There’s an uproar over Palhares’ actions in the aftermath of the grizzly title fight, mainly because this isn’t the first, or even the second time that Paul Harris has been on the down-low in the cage. Shields says he feels a suspension at the least is likely:

“Yeah, you know, I think it was blatant,” said Shields. “I think he should probably be suspended. Especially with his track record. I mean it’s not my place to say, that’s between the athletic commission and them. I don’t know, but I know if I was in charge I’d definitely suspend him.”

Stay tuned to LowKickMMA for more updates on the Palhares-Shields story. Who knows, perhaps if Shields should catch up to ‘Toquinho’ in the street we’ll have some more Stockon massive brawls to report on…