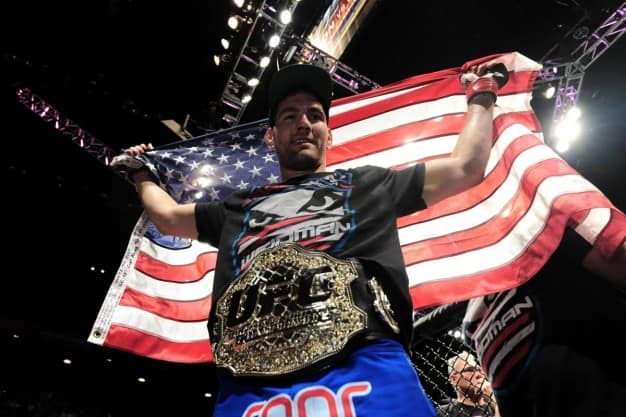 Chris Weidman is sick and tired of all the haters.

Following a dominant first round TKO win over Vitor Belfort (watch highlights here) in the co-main event of last night’s (Sat., May 23, 2015) UFC 187, the undefeated champ told Joe Rogan that it was time to stop deeming him a ‘fluke’ champion, and his invitation to do so wouldn’t last much longer:

Weidman did become champion by finishing all-time great Anderson Silva twice and followed it up by defending his belt against Lyoto Machida at UFC 175 last July, but after a disappointing streak of injuries delayed his awaited bout with Belfort twice, he said the doubters came out of the woodwork in droves:

“I’m for real. I felt that after the Machida fight there was a good group of people that started following and there was believers. But with the time off, the haters just grew stronger and stronger, so I had to just come in here and do my thing again.”

A big part of Weidman’s success is his massive amount of confidence, as he believes he can and will topple any world-class challenge set before him. Belfort bloodied him with an early flurry after Weidman got sloppy looking for a knee, but the champ said he knew he could weather the storm, and felt ‘The Phenom’ get less powerful as the initial barrage wore down:

“He caught me with an uppercut and I was like, I probably should move out of here, this is not smart. And then as soon as I got out, I felt his punches get a little slower. I knew he’s gonna break before I break. It was fine.”

With his heated rivalry with Belfort now put to rest, Weidman will presumably head on to a massive bout with surging No. 1 contender Luke Rockhold. Ronaldo ‘Jacare’ Souza could also certainly be in the mix, but the champ doesn’t really care whom it’s against. The UFC has a Dec. 6 date saved at New York City’s Madison Square Garden, and he’s planning on headlining that card:

“I’m not missing the Madison Square Garden fight, that’s for sure. That’s all I really care about. Asking about ‘Jacare’ or Rockhold, honestly it doesn’t matter. I want to fight either one of them, but in Madison Square Garden. As long as I’m in that venue, I’m a happy man. That’s a dream.”

So with the plans for his next title defense in place, the sky seems like the limit for Weidman. Yet like he mentioned, he just doesn’t seem to be getting the respect one would expect from an undefeated champion who has laid waste to three decorated former champions in a row.

The doubters would have you believe that his two wins over Silva were fluky, and I can’t deny that. Silva clowned and danced his way to a shocking knockout loss two years ago at UFC 162, and while I’m not sure (and may never be, because I’ll never know) that Weidman was definitely a better fighter that night, he is now and there’s not much to support the idea that an aging ‘Spider’ would have much, if anything, to offer him in the rematch.

And Weidman also backed up his resume with an exciting five-round win over Machida, something that is no easy task. True, his next perceived opponent Rockhold finished Machida with ease at April’s UFC on FOX 15, but by that logic Belfort knocked out Rockhold and we all saw what Weidman did to him last night.

Either way, it’s simply time to give Chris Weidman his due as one of the top pound-for-pound fighters in mixed martial arts (MMA). He’s run through a list of illustrious legends, and now his work is just beginning with lethal contenders like Rockhold, ‘Jacare,’ and Yoel Romero waiting in the wings.

Something tells me that Weidman welcomes the massive pressure that all of those bouts will bring.